Driving in the Post-Apocalypse 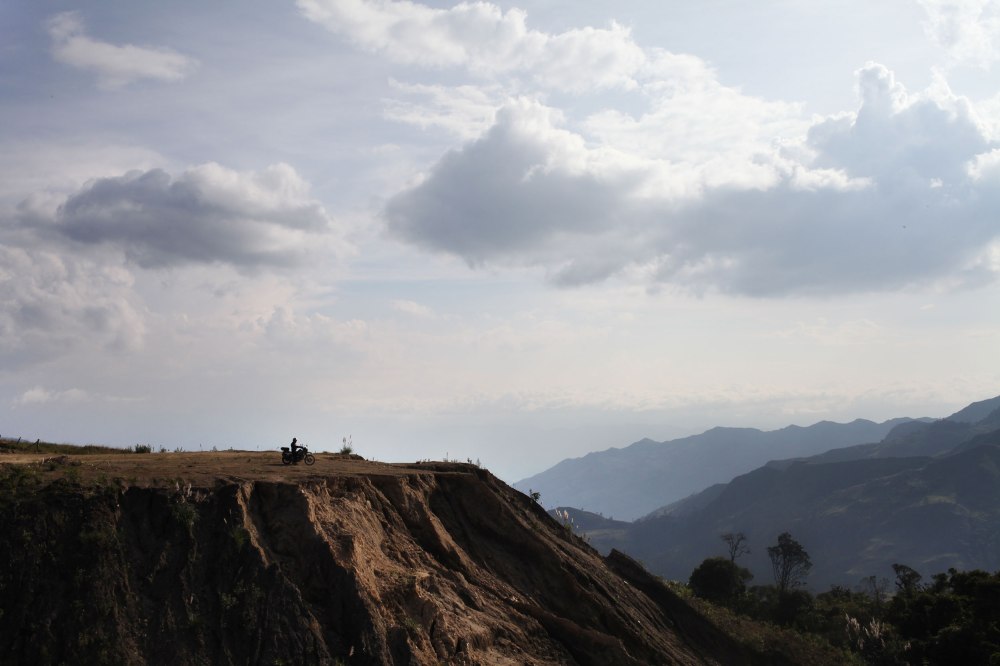 One of our last views of Ecuador. Photo: Alex Washburn

After our restful time in Cuenca, it was time to pack the bags and hit the road. We thought we could make it out of Ecuador in one day, but seeing as half of the country has the Andes mountain range running through it, you can’t make it anywhere very quickly.

In Mexico we weren’t happy with anything less than a 200 mile day, but when hairpins and s-curves, climbing then descending then climbing again, and dodging trucks (and stray dogs) is the norm you’re happy with a 100 miles. However, the day before our last day in Ecuador we saw some of the best scenery in the whole country, rolling green mountains, and just enough curves to have fun on without slowing you down.

Northern Peru greets you with over 700 miles of this. Photo: Nathaniel Chaney

Research is a must before every border crossing! Even if it is just to see pictures of where the buildings are (many crossing in Central America have the buildings in illogical places where they must be hunted out) and to know how much you might have to pay for insurance. In looking at the Ecuador-Peru border there seemed to be unity on the inter-webs as to its ease.

Leaving early and never knowing what to expect we headed to the border and in less than an hour and a half we were processed out of Ecuador and into Peru. This was the best border crossing of the whole trip, bar none. The Peruvian Aduana (customs) employees were friendly and helpful, two qualities you don’t find in many border officials, and a first of the trip, they even made copies for us of the paperwork they required!

Many of the countries that we have visited have shocked me in how different they are then I had imagined them. For instance, I always thought that Colombia was just one giant jungle. And don’t get me wrong, there is jungle there, but no country is one ecosystem, and the landscape of Colombia is one of the most diverse we have seen. With that said, northern Peru was exactly how I imagined it.

The coastal desert region of Peru covers roughly 73,000 square miles of land and reaches inland between 12 and 62 miles. It is known as the Sechura desert in the north. Photo: Alex Washburn

Ecuador is green, lush, and for a third world country, particularly trash free (Alex informed me later that there were anti-littering signs posted everywhere along the road). Northern Peru could not be any different, and was the most dramatic shift in environment we have experienced. The landscape is dry, arid desert spotted with a few towns. As you continue, the desert only intensifies into dunes that remind one of Tunisia.

We filled up with gas after the border, using the last of our cash, and continued on, hoping to hit an ATM at the first real town. Tambo Grande was the first larger town (i.e. not a cluster of huts along the road) that we stumbled upon and we went in search of an ATM. After driving through the whole town we stopped and Alex asked a passerby where we might find a cash machine. His response was that there wasn’t one in the entire town.

We got to a point on our first day rolling through the Sechura desert where we just slowed to a stop in awe of the nothingness surrounding us. Photo: Alex Washburn

Onward it was. Continuing through large swaths of dry desert and the occasional grouping of houses, that are more what people at home would think of as huts, on the sides of the freeway. We got to Piura (the first major town on the map) and here we struck pay dirt at a mall that had a line of ATMs from every major international bank. We decided to call it quits for the day and thankfully we did, because early the next morning we found out how long it was to the next town.

What started as brown dry desert reminiscent of Baja, California, gradually turned into dunes as we got further from Piura. The luck of that day was that we filled up before we left Piura, because once we were in the desert it was 120 miles to the next town. As we entered the Zonas de Dunas, the winds picked up and it was hours of riding with the bikes tilted at an angle, reflected in the small brush on the side of the road that had grown blown in one direction.

We stopped for a quick photo break 200 miles(isn) north of Lima. We were tired and dehydrated when we finally arrived although this desert is not actually that hot. Photo: Alex Washburn

What some people might not realize about this trip, or any trip on motorcycles, is that there are days where all you do is get up, and ride. It’s not a complaint, we have seen some of the best sights while on two wheels, but it is a reality I don’t think many people grasp. Riding into a town at dusk, looking for a hostel with parking (something you never worry about while backpacking), and only thinking about how much your ass hurts and that the overpowering, sometimes rancid, smell of your riding suit permeates every breath.

Get up the next morning, pack the bags, grab a bite and jump back on the bike for another full day. The dunes continue, going through small towns on a two lane road, dodging trucks and tuk-tuks. The sun is high in the sky, then low, then setting. The haze of evaporated water blends sky and earth and sand and road. A water color painting of a landscape that has no outstanding features. And we ride.

Nathaniel never takes photos of me so here is a selfie I shot with a 40mm. You’re welcome. Photo: Alex Washburn

Get up, pack, no breakfast, on the bikes. We make it to the ocean, dunes that lead right to the break. The towns become further apart. Stop when you can for food, for gas, for a break from the bike. Then more riding. The mirages stretche ahead, endless pools of nonexistent water, reminding you of the heat and the sand and the sun beating down. Sweat pools in your underwear, you can feel it every time you shift weight on the bike. 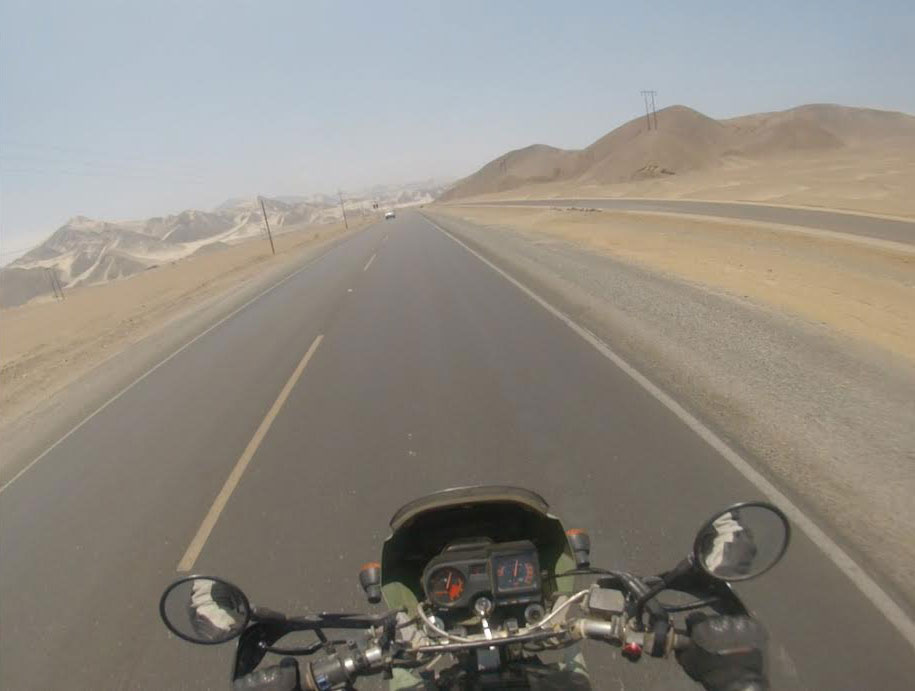 Even slight changes in scenery were exciting during our 700+ mile ride through the desert. Photo: Nathaniel Chaney

Its near the end of the third day that we hit a true stretch of freeway, not a two lane road, but an actual freeway and we twist the throttle and really open the bikes up. Ripping through the dunes, and the mountains of trash. What makes northern Peru look like a post-apocalyptic nightmare are the mounds of trash, which are usually on fire, that accompany the exit of every city.

Trash as far as the eye can see, with huts scattered throughout where people live and sift through the garbage. And then back into the desert of Mad Max the road warrior. The wind picks up, you tilt the bike, feel the sand sting that one spot your gloves and jacket have left unprotected. And the sun sets.

The final days ride brought us to Lima, our goal for the first leg of Peru.

Peruvians favorite part of the car is the horn, which they use instead of brakes or signals to inform others of the haphazard driving maneuvers they will perform that would churn the stomach of even the most talented of stunt drivers. Traffic be damned, Alex maneuvered us through the honks and sirens and shouts to our hostel, for a couple of days rest and some sight seeing before we get back on the bikes.

5 Comments on “Driving in the Post-Apocalypse”