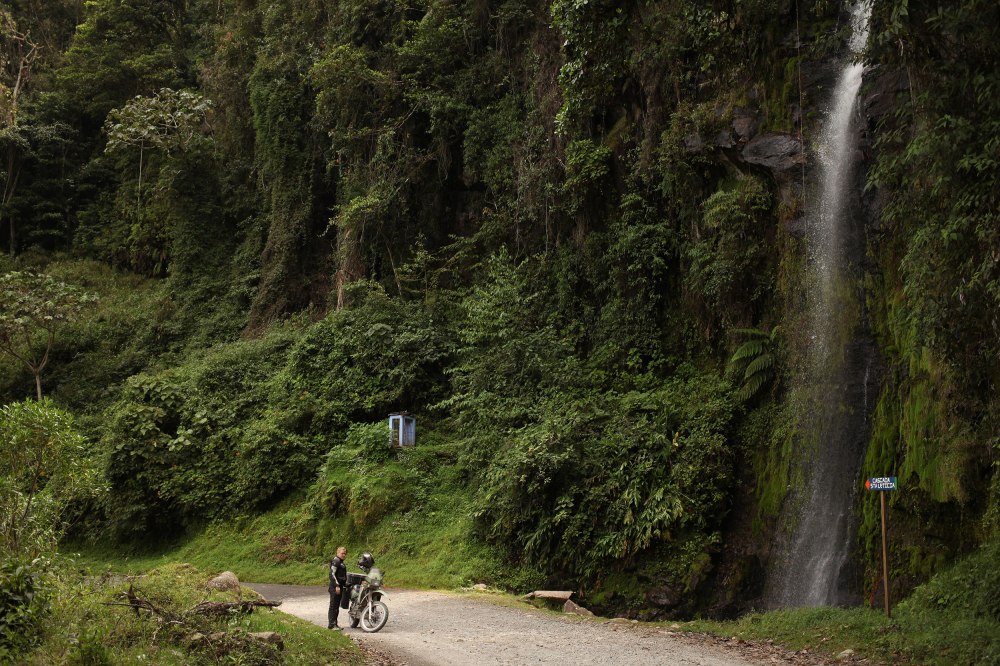 Between La Plata and Popayan Colombia we found the Staleticia waterfall. We pulled over without discussing it and just stopped to appreciate it for a minute. Photo: Alex Washburn

After Bogota it was like Willie Nelson said “on the road again”, the miles just keep coming and we are going with them. From Bogota we were headed for Tatacoa (the desert we thought we were going to with the KLR riders), but ended up passing on through (a longer story of how we got lost and would have had to cross a river on a dingy is involved, but we wont go there) and kept on the road. It went Bogota, Espinal, La Plata, Popayan, Pasto, 500+ miles of riding to get to the border and into Ecuador. 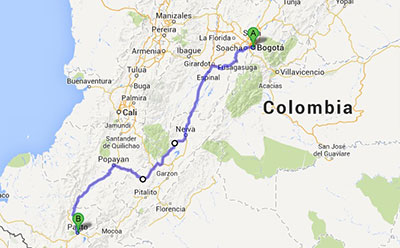 The only glitch was in looking at Google maps and not realizing that even if a road is listed as a highway it might just in fact be a dirt, rock, pothole road that stretches on for 75 miles. That was the day of riding when we went from La Plata to Popayan, at the beginning of which Alex famously said:

“I think it will be all paved today.”

The scenery of Colombia has been just amazing, but it is hard to focus on when your going ten miles an hour and getting bounced all over the place. Imagine riding on a road that is going through middle earth (J.R.R. Token’s Middle Earth), the scenery is amazing, but I don’t think those hobbits put a lot of effort into smooth roads for their wagons. The next day was an exhilarating ride through the Andes to Pasto, at some points literally riding on the side of mountains and dodging trucks trying to get to a warm bed and a hot meal (because a warm shower is a little to much to hope for).

The next morning it was up early and off to the border, with a stop on the way at Las Lajas, where there is a cathedral built into the side of a mountain over a river. I had seen pictures before we got there, however the site impresses regardless the way few sites really do compared to photos. 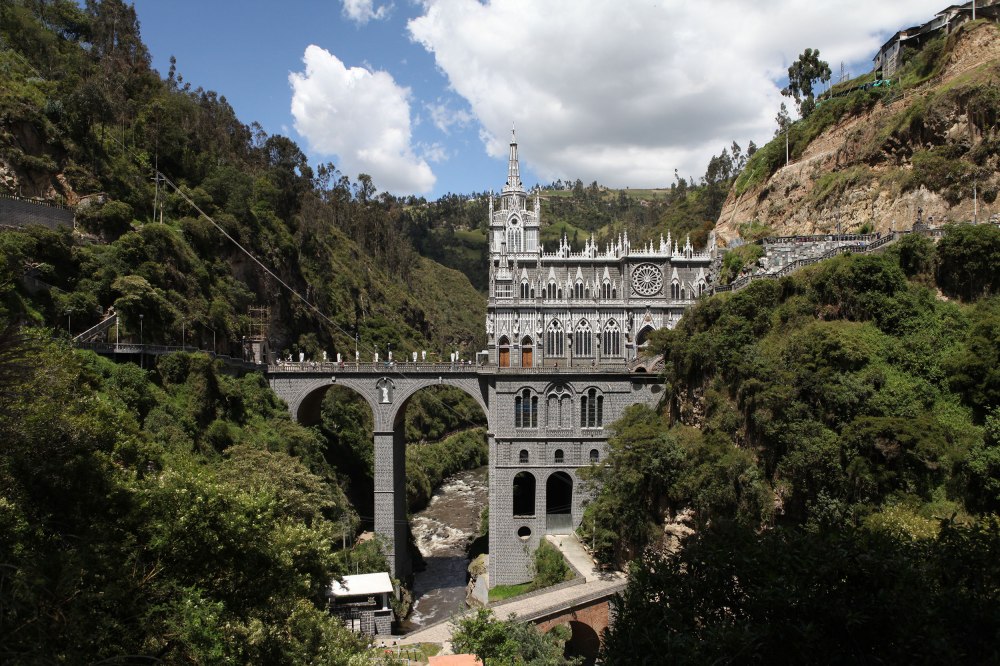 The Santuaria de Las Lajas is an incredible place to visit… When we arrived I couldn’t help thinking ‘Colombia just HAD to wow us one more time.’ Photo: Alex Washburn

As we pulled up to the parking lot, I saw another KLR with a trailer and the driver approached me before I even made it into a slot. The pilot is a Norwegian named Jørgen who is planning to ride to the tip of South America by the end of the year. He bought the KLR in Colombia, it had been in the country way beyond the allowed time and so he was heading to the border as well, with a plan to just drive across and then walk back and get a stamp before heading to Ecuador (the plan worked by the way).

Jørgen poses with his KLR650 and the trailer he had custom made (for less than $100) before we leave the Sanctuario de Las Lajas to go have guinea pig for lunch. Photo: Alex Washburn

After this is was time for lunch (cuy, which is a large guinea pig) and then off to another border crossing and our 11th country of the trip!

We made it to a little town called Otavalo, which was rumored to have a massive market on Saturdays. As we cruised into town it was apparent the rumors were true, as almost every street in the centro had stalls selling everything from bracelets and textiles, to food and spices. We high-tailed it to a hostel and then headed out to the markets to see what we could find.

The market covers most of the downtown, with the main square having many stalls that are stationary and then tons of tarps thrown up to create many nomad stalls. We spent the majority of the day watching all the gringos shopping and haggling with the vendors. While the market does cover a tremendous amount of space, most of the wears start to blur together without a tremendous amount of variety if you aren’t interested in textiles of some sort.

A pair of locals walks through the large market of Otavalo. A lot of local women wear hats similar to this one. Photo: Alex Washburn

A woman kills and prepares a guinea pig in the back kitchen of the restaurant where we ate lunch in Las Lajas. Photo: Alex Washburn 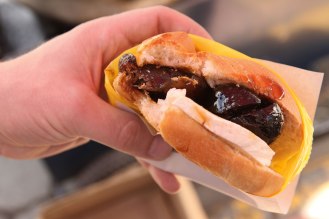 The greatest street food we’ve had so far in Ecuador was figs stewed in sugar cane and stuffed still warm into a soft bread roll with cheese. Photo: Alex Washburn 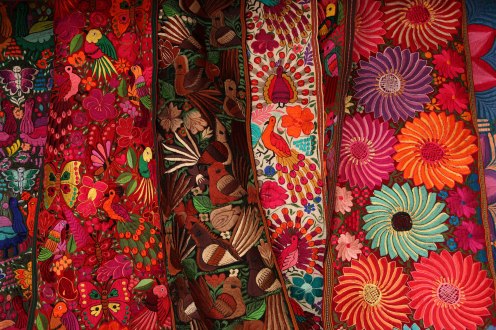 An example of the textiles for sale in Otavalo. Photo: Alex Washburn

In the evening we met up with Jørgen who had made it to Otavalo and ended up having a meal of delicious street food: tamales, empanads, meat kebabs, and a hot strawberry drink to help fight off the chill at such a high altitude. A couple hours of good conversation with a fellow traveler before it was time to hit the sack for another riding day.

We pose on each side of the equator line at the La Mitad Del Mundo monument just outside of Quito. Photo: Alex Washburn

The morning came and we rode at of Otavalo, headed to the middle of the earth (literally). There is a monument just north of Quito (elevation 9,350 ft) that marks Latitude 0, the exact center of the world, where you can stand in the northern and southern hemispheres simultaneously. The monument itself isn’t really impressive, and they have tried to do a good job of adding other attractions to keep peoples interests, but I wasn’t too worried about recouping the stiff $3.00 entrance fee.

What really struck Alex and I was that we had ridden from California to the center of the world. It marked a milestone in the trip and we were happy that we had done it together (without killing each other…yet). There are still miles to go and adventures to be had, but for the rest of the day we basked in accomplishment, now officially in the southern hemisphere.

← The Colombians
The swing… →

6 Comments on “Chasing Asphalt to Ecuador”