A quest for penguins

One of our fellow tourists (from Hong Kong) at Reserva Nacional de Paracas, just outside of Pisco Peru. Photo: Alex Washburn

Lima is more than double the square mileage of Los Angeles and you feel it as you wage war navigating it. Most of the countries thus far have had more aggressive driving than in the US, but they still respect motorcyclists as part of the traffic flow. Not the case in Peru, and there are noticeably less motorcycles in this country than the majority of the rest of Latin America, which may be partially to blame for drivers lack of concern over motorcycles. This goes for most of Peru, but is exceptionally bad in Lime (talking with a Brazilian biker today confirmed he also thinks Peru treats bikers poorly).

This is an awkward couple photo. Enjoy! Photo: Our fellow traveler

For our first full day in Lima we did a walking tour of the historic downtown, which has several impressive cathedrals, shopping districts, and tons of tourists. The main centro has the President’s house (which has a changing of the guard akin to Buckingham Place), the Arc Bishops Seat, as well as, the resting place of Francisco Pizarro.

Further down the road is the Monasterio de San Francisco, known for its humongous catacombs, which has some 70,000 human remains that weren’t discovered until 1943. Many of the bones were placed in circle pits, that were built to absorb earthquake shock, in geometric patterns with skulls creating circular patterns. What Alex and I found just as fascinating was the Peruvian Last Supper by Marco Zapata, which is painted on one of the walls in the cathedral. Google it, and you will notice that a lot of the food depicted are traditional Peruvian dishes, as well as, there being more people than just the 12 disciples.

Other than a couple trips around the city, Alex and I had business to take care of getting the bikes some much needed service, new oil filters, spark plugs, chains cleaned, new brake pads. On top of this I was dealing with some stomach

Nathaniel as a general rule does not like animals but he loves penguins. This was one of the little guys we spotted on the tour! Photo: Nathaniel Chaney

issues that delayed us leaving Lima for a day. For anyone thinking of touring on a motorcycle, if you don’t have to go through Lima I would suggest skipping it. I know that many people will probably disagree with me, but for Alex and I, there wasn’t much to keep us there and the dealing with the traffic just isn’t worth the hassle.

On a note of point, I did learn in Lima that Peru has penguins! They are the warm weather kind, and are in a large bird sanctuary that was on our was to Nazca.

Stomach feeling better, we jumped on our nicely cleaned bikes and roared off south, after spending an hour in traffic getting out of Lima. A short ride to Pisco, where we go ready to to see the sites the next day.

The tour of the marine and bird sanctuary was decent, but Alex and I really only cared about seeing the penguins, and we ended up getting to see two, which made it worth it. Also on the tour you get a great sea view of Paracas Candelabra, a geoglyph carved into the northern face of the Paracas Peninsula. It was carved using the same techniques as the Nazca lines, and is quit impressive when you see it.

More desert, dunes, and riding as Peru is nothing if not consistent in the parts we have rode through thus far. It was another short ride down to Nazca, and here we find ourselves as we get ready for a plane ride over the famous lines. 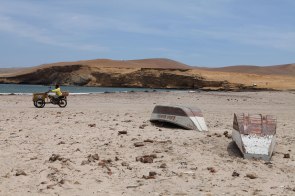 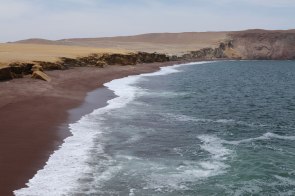 (Alex says she hates all of her Lima photos which is why we are not using any in this post.)