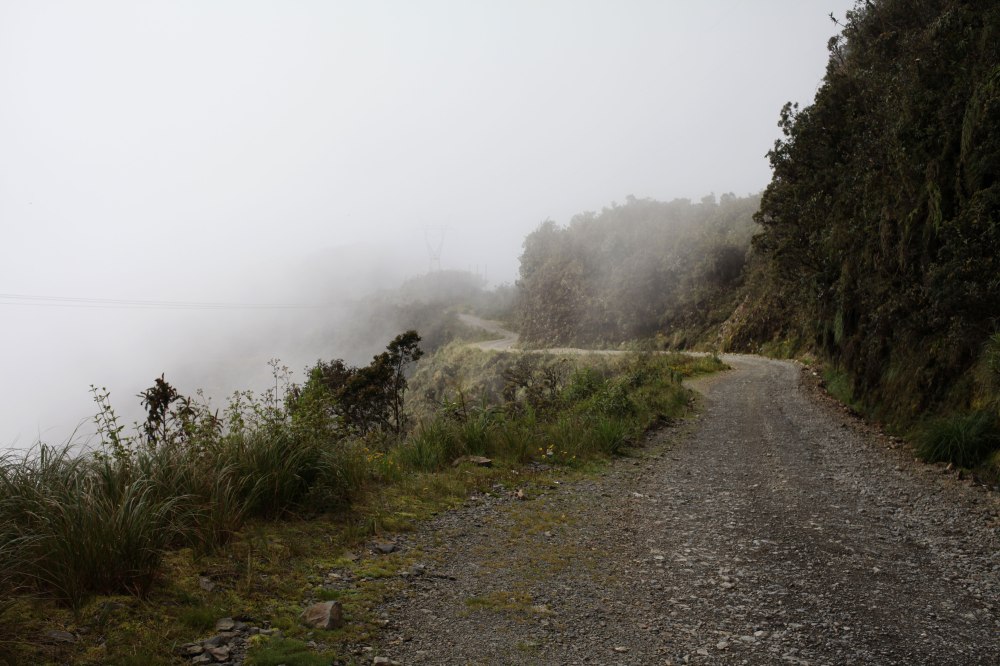 The view from the top of the Bolivian Death Road. Photo: Alex Washburn

The Bolivian Death Road lives large in the minds of ADV riders. It was crowned the world’s deadliest road in 1995 and the nearly two decades since hasn’t tamed the curvy unpaved beast.

I agreed to go, with some reservations, although I wouldn’t say I was afraid. However, I probably wouldn’t have gone out of my way to do it if I was on my own.

We woke up early in La Paz and pulled on our riding suits before heading out into the crisp morning. The start of the death road is approximately an hour ride outside of the Bolivian capital and a giant yellow sign greets you on an uneven gravel turn out just off highway three.

We parked our bikes and then walked over to a bench-sign combo that gives a brief history of Bolivia’s most infamous 60km stretch of gravel. I learned standing there that the road was constructed by prisoner’s of war, it is often foggy along the route, and that ever since it earned the title of the world’s deadliest road it has been a huge tourist attraction (especially for mountain bikers).

The sign also spells out the rules of driving the death road. Because of its form you must keep to the left hand side of the road and vehicles moving up the hill have the right of way. Accidents usually happen when two cars meet at a narrow point and the uphill vehicle must back up- tires can easily slip over the edge of the cliff.

(According to wikipedia several hundred people die on the road every year, but I think those numbers are grossly inflated.)

We couldn’t see very far down the path because of the fog drifting around and after taking the obligatory photos of the sign and the entry point we hopped back on the bikes and headed off into the mist.

A cross marks where people have died on the Bolivian Death Road near a series of small waterfalls. Photo: Alex Washburn

Since we were heading downhill we were required to ride on the outer edge of the road. There are some guardrails (which we didn’t expect) that for some reason are never in the truly scary parts.

Most of the death road was not technically difficult riding, but the idea that around any blind turn could be a truck keeps you on your toes. Thankfully, we only met one vehicle going the opposite direction and it was on a portion of road where I could safely stop and let him pass.

For us, the most memorable part of the road was the portion where you ride on very uneven wet rocks beneath several small waterfalls (getting wet) and pass a solemn grey cross marking where people have died. The section is roughly 300m long and it is a narrow piece of work with a sheer mossy rock wall on one side and a lush green cliff dropping off the other into only god knows where.

The camino de la muerte was not nearly as tough as I thought it would be and if I had to make a list of the top 5 rides of the trip so far it would be on it.

8 Comments on “The Bolivian Death Road”