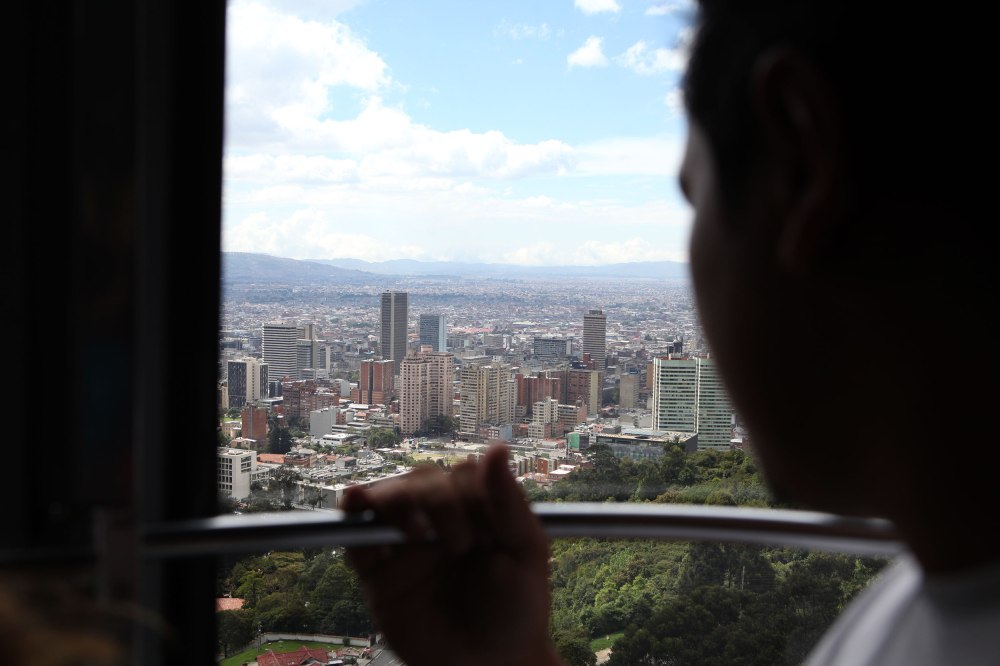 A man looks out over Bogota Colombia from the Transferico cable car that gives tourists and locals a view of the city from the top of a nearby mountain. Photo: Alex Washburn

Riding into Bogota, the capital of Columbia, was nothing like I expected. A few days earlier we had cruised into Bucaramanga, which you enter via mountain roads that give a view of the entire city as you crest them. This is what I expected when coming into Bogota, a city of 6.73 million people, but as Alex and I entered the city the limits, the city only slowly grew up around us.

In what reminded us of LA, and to a lesser extent Sacramento, Bogota is expansive, a main city built years ago that was expanded in the following decades. LA is 503 square miles, and Bogota is 613, which should give you an idea of how far it stretches. In a normal city the streets from north to south and east to west will be labeled Calle and Carrera, think street and avenue, and wont normally go past twenty or thirty. At the beginning of where Alex and I started we were at Calle 222, and we needed to get to Calle 9. 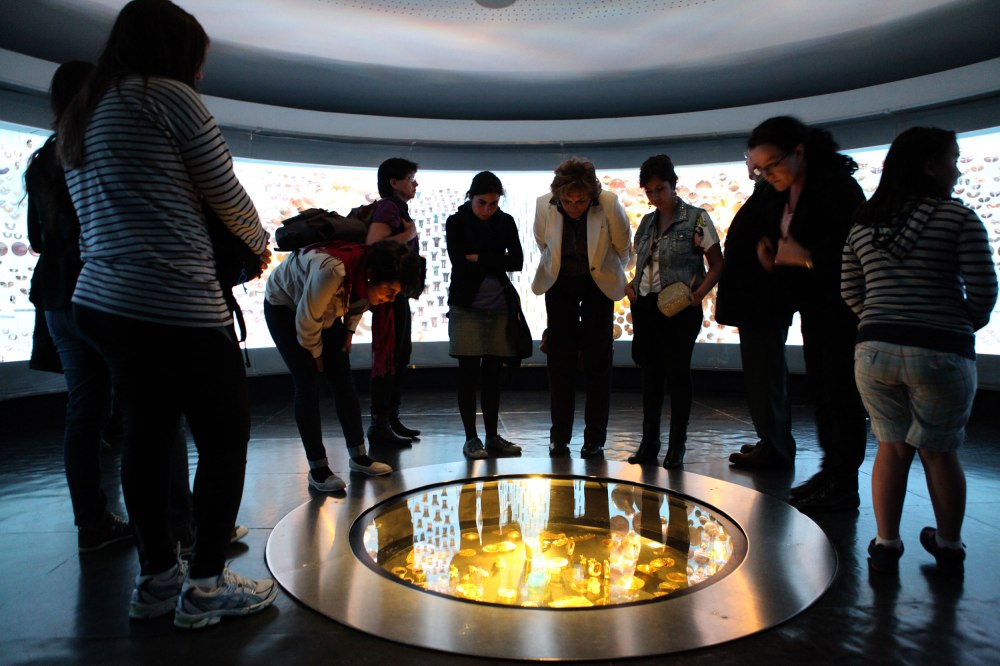 A group of tourists checks out a display at the Museo de Oro (Gold Museum) in downtown Bogota. Photo: Alex Washburn

Bogota brings together quaint neighborhoods, dirty trash heaps, museums, universities, street vendors, and churches in a way few other capital cities we have visited do. In La Candelaria, where our hostel was located (side-note: Musicology Hostel is one of the best hostels we have stayed at on this trip. The staff are friendly, the vibe is chill, and you can park a motorcycle in the entrance!) is the historic old town, full of churches and museums. It has a smaller town feel, until you ascend the church on Monserrate and get a full view of the city and how far it reaches.

While there could be many associations with Bogota, the City of Museums should be one. Within a six block radius of our hostel, there were at least five museums, and probably more that I am not aware of. There is the Military Museum, the Botero Museum, but the most prominent would be the Gold museum, which show cases gold workings from all over Colombia and easily has over 6,000 pieces on display. It can get a little overwhelming by the end and there are three sold floors of exhibits to peruse, though I was told Pablo Escobar’s gold Harley Davidson would be there and was slightly disappointed when I didn’t see it. 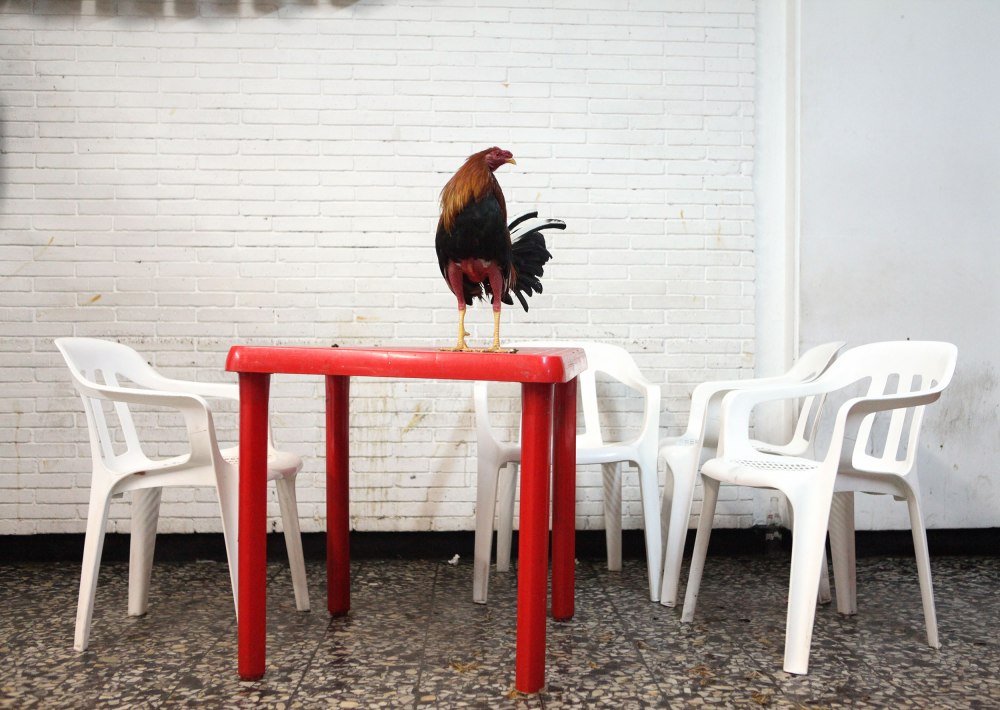 Alex being a photojournalist wanted to go to Club Gallistico and take photos. Club Gallistico is one of the oldest cockfighting establishments in the city and she’ll be doing a full post for that on her personal photoblog. Here a rooster waits to have fighting spurs attached to his feet. Photo: Alex Washburn

Bogota is located in a high plateau situated in the Andes mountain range, which means that it was a bit on the cold side even though it is middle of summer in South America. What helped to take the chill off was a local dish to the region, hot chocolate with cheese and bread with butter. We were a bit confused on how to eat the dish and ended up just dipping the cheese in the hot chocolate and nibbling on it only to find out later that you’re supposed to mix the cheese in and let it melt a little while you eat the bread and then drink the chocolate with the melted cheese inside of it.

As Alex mentioned in her previous post, there is a plethora of street food in Bogota, and many restaurants serving up traditional favorites such as Ajiaco (Colombian chicken soup) and tamals (think Mexican Tamales, but cooked in plantain leaves and considerably bigger with a softer form of masa). We weren’t left wanting once again for restaurants, but it is still hard to find good places among all the mediocrity, however asking locals and police officers never fails to produce results.

Bogota is so expansive you couldn’t ever explore all of it, from the historic downtown, to the more modern financial district (that has a building that at night would put Las Vegas to shame), to the outskirts with its apartments and neighborhoods. Alex and I enjoyed our time in Bogota, and thought it was the city that most surprised us thus far on the trip. Sure it is big and loud, like most capital cities, but there are treasures to be had if you put in the time to find them — and have a really great hostel to stay at! 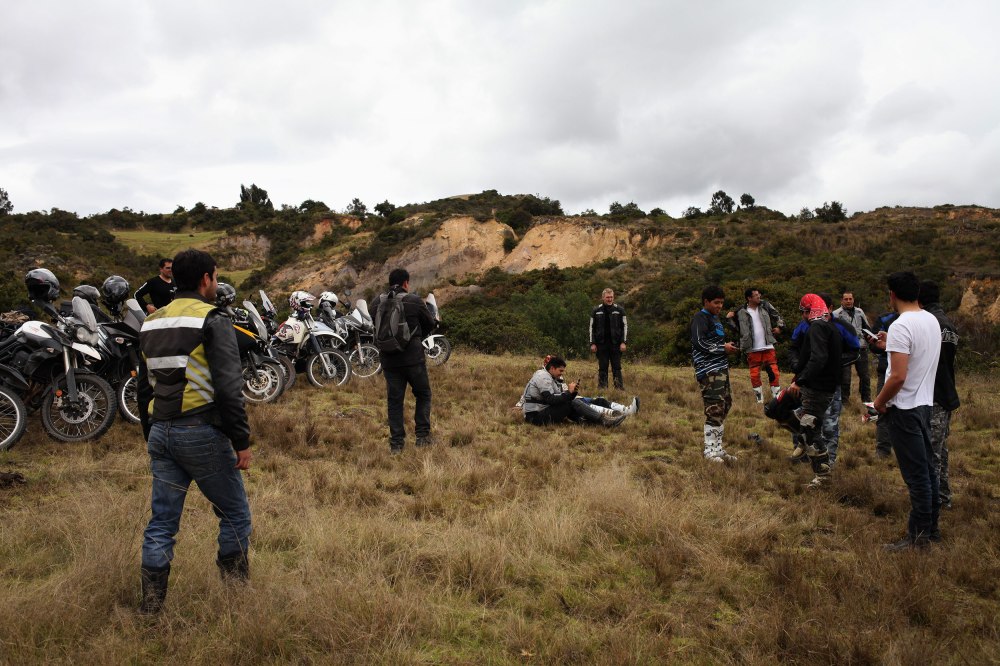 Our last full day in Bogota we met up with a group of Colombian motorcyclists and went off-roading just outside of Bogota. Alex has a ton of bruises from the adventure (full post on the ride tomorrow). Photo: Alex Washburn