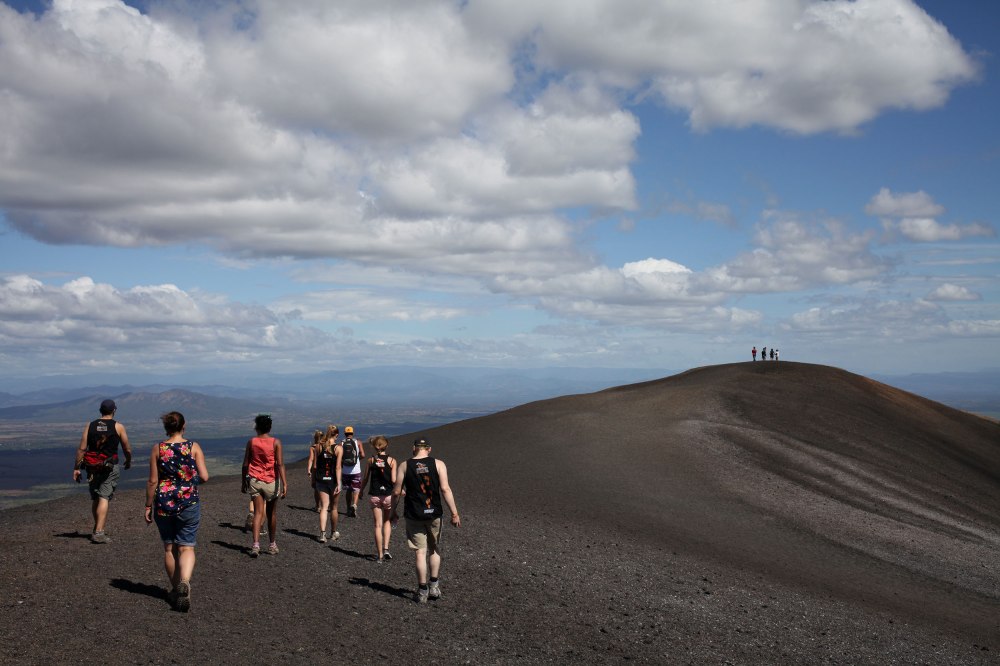 We explore the crown of Cerro Negro after an hour hike to the top. Photo:Alex Washburn

We climb into the back of an absurdly large giant four wheel drive truck with other travelers from the UK, Israel, Germany, Ireland, Australia, Holland and the United States; we all fidget with nervous energy grinning and waiting for our adventure to start.

The truck fires up and lurches off throwing us into one another as it rounds corner after corner, bumping along on small cobblestone roads in a way that would make veterans of the Knight Bus nervous (Harry Potter reference).

There are no seat belts and we grab onto the railings, seats, and each other for stability during the 45 minute ride to Cerro Negro.

About a decade ago an Australian with presumably too much time on his hands visited Leon Nicaragua and decided to turn the active volcano Cerro Negro into an extreme sport destination. He first tried boarding the hill with a snowboard and destroyed his equipment in the process — volcanic rock is not kind to fancy gear. Next he tried a refrigerator door (fail), before moving on to a picnic table (also a fail), a mattress (biggest fail) and a variety of other items he thought might make it down the 42 degree slope of black volcanic rock.

Today in Leon there are several companies that offer volcano boarding tours down Cerro Negro and although the protective gear varies slightly from company to company the boards they use are all the same. A one foot by four foot piece of plywood with several wooden slats across it and a rope handle you hold like a baseball bat can be found on the top, on the bottom a plank of thin metal and a patch of formica held on with adhesive provide your sliding surface. The thrill of sliding down an active volcano wearing prison jump suits while sitting atop construction scraps is what brings our collection of world travelers to the back of this obscene vehicle.

The cobblestones quickly gives way to cracked pavement and then dirt. The driver rushes over the small roads kicking up a mountain of dust that engulfs bicyclists, cows, pedestrians and entire busses as he rushes past and the road just keeps going.

Local guides claim that because of the wind patterns in the area Cerro Negro is the only volcano in the world suitable for Volcano Boarding. This may or may not be true but a google search for ‘volcano boarding’ will only give you hits related to Leon Nicaragua.

We pull up to the entrance of the nature park and slide to a stop. We all have to pay a $7 entry fee to enter the park and sign our names in the visitor ledger before we ride the last few kilometers to the base of Cerro Negro.

Cerro Negro isnt impressive looking because of its size, although it feels massive to hike up carrying a piece of metal sheathed plywood and your obligatory jump suit. No- Cerro Negro impresses with its dramatic slopes of black rock. Nothing grows on it and at the top you are greeted only by the smell of of sulfur and the giant bugs that are drawn to it.

Our guide Jose gives us a quick rundown of what to expect on the hike, how to best carry our board and tells us that we will stop three times along the way for information and to rest — we begin.

The hike starts easy enough on roughly shaped steps made out of larger rocks the size of your head, but as the slope gets steeper, the rocks get smaller, and the wind picks up hitting your board like a kite, it can get scary. We creep along the side of the volcano stopping and posing for photos when Jose tells us to and gripping the boards for dear life as we march up the path.

The real tragedy would be falling off the path, losing your board, and doing the hike for nothing. It takes an hour to climb the Volcano and less than a minute to slide down it, less than 30 seconds if you’re going for a record or are interested in seriously hurting yourself.

At the top we take time to appreciate the view and Jose scuffs a mark into the dirt and has us feel the earth just a few inches below the surface, surprisingly it is almost too hot to touch and you can see a few people’s faces questioning the sanity of sliding through it wearing a cotton jumpsuit and flimsy plastic goggles.

I am already wearing my goggles because it’s so windy at the top of the volcano little bits of rock and dust keep flying into my face. I don’t care if I look silly – I’d rather not blind myself before the ride.

Jose gives the command to ‘SUIT UP!’ and the moonscape at the top of the volcano gets even more bizarre as a dozen tourists start pulling on orange jump suits and goggles, a prison gang run wild. I ignore the command (sorry Jose) and buzz about taking photos of people getting ready as Jose starts his safety speech.

The single rider speed record on Cerro Negro is over 50 mph. When you consider you aren’t going to be wearing gloves or a helmet as you slide down a hill comprised solely of volcanic rocks, then listening to Jose when he gives you safety instructions is key. However – I’ve done this before and I have no desire to break a speed record.

Our secondary guide waits at the bottom of Cerro Negro with a speed gun. Photo: Alex Washburn

Last year a couple decided to race down the hill and the boyfriend lost control of his board and hit his girlfriend, breaking her back. A few weeks ago another tourist on vacation with her family lost control at a high speed and broke her leg and foot in several places, stories Jose doesn’t share till we are all at the bottom. It’s scary – but the same things could also happen while snowboarding.

It’s at this point I wrap my 5D Mark II in plastic with my iPhone and stick it in my backpack before pulling the jump suit over it. We take our places in two lines as Jose issues his final instruction before disappearing over the lip of the volcano to take pictures of us as we board down.

Several people take their turns and then suddenly it’s my turn. I carefully position myself on the board as I try and center myself in the starting chute while Nathaniel looks down at me with his GoPro.

The signal is given and I start scooting myself to the edge. I have problems getting out of the chute (the guy before me did it too fast and fell off his board), but once I hit the slope I start to slide easily down the volcano.

Gripping my rope I think I am going too fast so I dig my feet in, but I can’t seem to slow myself down. Once I reach Jose I know I am not allowed to brake anymore because the slope becomes too steep to safely slow yourself down. One of Jose’s biggest warnings at the top:

Once you pass me do NOT try and brake. 45 degrees is too steep to brake on, you will lose control and it will hurt.

The adrenaline starts to pump through me and I am reminded to keep my mouth closed as I taste the grit flying into my teeth. I clamp my mouth shut as I slide past Jose and then I lift my feet. I can use them to steer still – letting my motorcycle boots carefully skim the surface of the volcano, but I resist the urge to bury my feet in the rock.

Our Guide Jose gives us boarding technique and safety tips before we head down the volcano. Photo: Alex Washburn 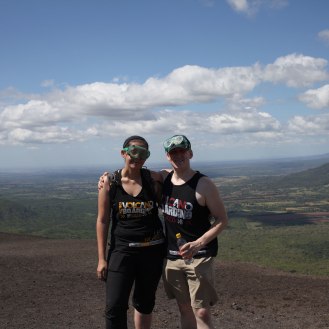 Nathaniel and I pose for a photo at the top of Cerro Negro. Photo: Our fellow boarder Josh

A cheeky evacuation sign points to the area where you go off the side of Cerro Negro. Photo: Alex Washburn 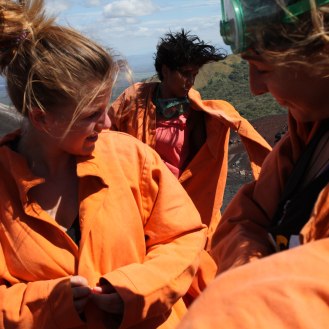 Volcano boarders suit up at the top of Cerro Negro. Photo: Alex Washburn

A guide uses a speed gun to ducument how fast boarders make it down Cerro Negro. Big Foot Hostel runs the only tour with a speed gun. Photo: Alex Washburn

We pose for a photo with our fellow Volcano Boarders at the end of our Big Foot Hostel Tour. Photo: Our Guide Jose

I can feel the friction heat up the board underneath me and I wonder to myself if something could catch fire with that much heat. My speed starts to increase as pure gravity and the formica slicked board do their work. I start to hop slightly over a few bumps and for a second I think I am going sideways – rushing past our secondary guide who holds a speed gun I safely come to a stop.

I stand up, careful to pick up my board by the rope (the board is now hot enough to burn you) and I give my guide my name ‘Alex’ so he can record my speed. I join the others at the truck and start to strip off my jump suit watching the next few people make their way down Cerro Negro.

Once everyone has made it to the bottom we watch in awe as Jose runs down. He passes out our beers and takes a celebratory photo of all of us before we climb back on the truck for an even crazier ride back to our Hostel. At the hostel all volcano boarders are given a free mojito, most people caked in black dust gulp it down and make for the showers.

These are the days that make travel worth it.