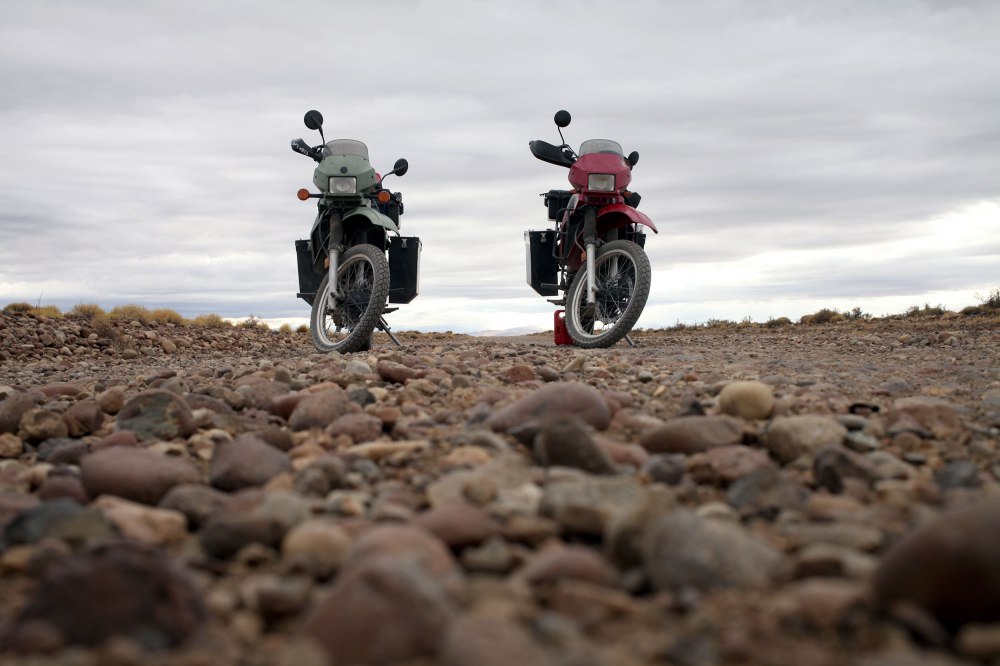 The road to Rio Mayo was a beast. Photo: Alex Washburn

After our adventures with Alex’s radiator, we were both eager to finally get on the road and ride every day till we made it to Ushuaia. We got up the next day and headed off on Ruta-40, after having breakfast at the gas station we filled up at (Note: Argentina has some pretty awesome gas stations with meals, that sometimes, are better than you would find in a restaurant). The sky was looking dark, and we wanted to get on the road to hopefully avoid any more rain, as the temperature was likely to continue to drop as we moved south, and riding in wet gear does nothing but slow you down. 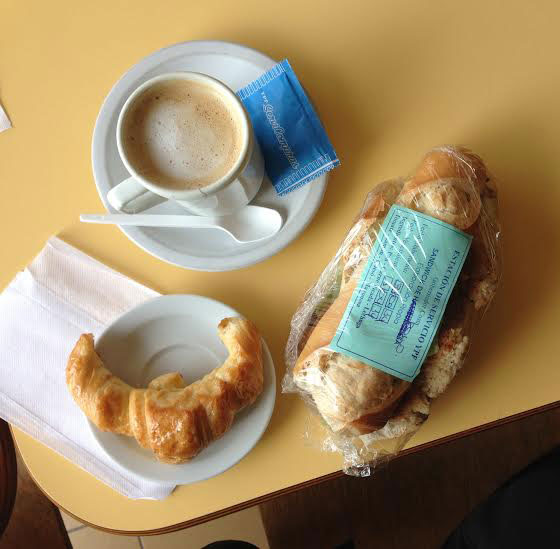 About 50 miles down the road it curved and within the next five minutes we were facing bright blue skies, it was one of the few times on the trip we were able to out run the rain (the next time being the following day).

Ruta-40 is famous in Argentina, and in all of South America, with many tourists viewing it as akin to Route-66 in the US. It runs all the way from La Quiaca, in Jujuy Province, in the North to Punta Loyola, near Rio Gallegos, in the south a total of 3,107 miles.

While the Argentinean government made a resolution in 2006 to pave the entire length of Ruta-40, Alex and I experienced first hand that this is still a work in progress. Talking to locals, mechanics, hostel owners, I had even bought a map that listed what routes were paved and not paved in Southern Argentina, to try and give us a shot at not doing anymore 120-mile dirt/gravel roads, to help speed us along.

All of this planning was for not when we reached Alto Río Senguer, filled up with gas and had a cup of coffee, all with the plan to ride to Perito Moreno along the 40, since we had already done 120 miles that day with no issues. Leaving the gas station we followed signs toward Rio Mayo (along the way to Perito Moreno) and stopped just shy of the edge of town as the road became, what the locals call, “ripple” or gravel.

We double checked the map to make sure we were going the right direction (we were) and agreed that this must just be a section of gravel that lead back to the great asphalt of Ruta-40 we had been riding on all day (pipe dream). About five miles into the ripple road, a truck came cruising by and we flagged him down so Alex could ask if we were in fact on the 40 and how long the ripple continued. His response was that yes we were on the 40 and that it was ripple the whole way to Rio Mayo, about 60 miles. 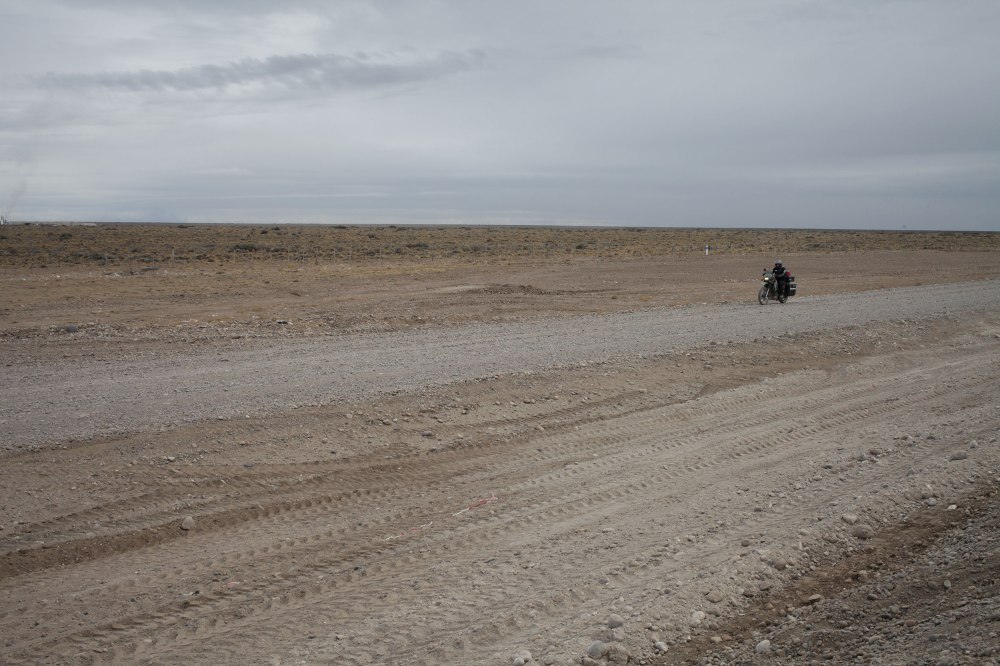 This was the ‘scenery’ we faced between Gobernador Gregones and Tres Lagos. It wears on the mind, body and soul. Photo: Alex Washburn

There was no way we were going to make it to Perito Moreno, and I had doubts on how long it would take us to reach Rio Mayo as it was already two in the afternoon. I also wished I could go back and yell at the gas station owner, who we asked about Perito Moreno and he never mentioned once that the road there was all ripple. We continued down the road at a snails pace, only reaching second gear once, and barely cresting 15 miles an hour on the good stretches.

Concerned about the integrity of my gas tank (it had been welded in two places) Alex took the lead and soon disappeared around the corner. I continued at my ten miles an hour pace, going to the happy place in my mind and trying to ignore the otherwise complete lack of scenery. Cruising around the corner I soon saw Alex’s motorcycle, on its side, Alex standing next to it. The gravel had gotten big and deep, and she lost control and had to let it fall. Nothing the KLR can’t handle, and we both lifted it back onto two wheels and noticed that the radiator was leaking again.

Not having the time, we had only done 30 miles at this point, or the tools to fix it we decided all we could do is continue on and get desalinated water and coolant further on down the road. Another 30 miles of bland scenery, gravel, and ten miles an hour landed us on the door step of Rio Mayo, just as the last rays of sun light faded from the sky. 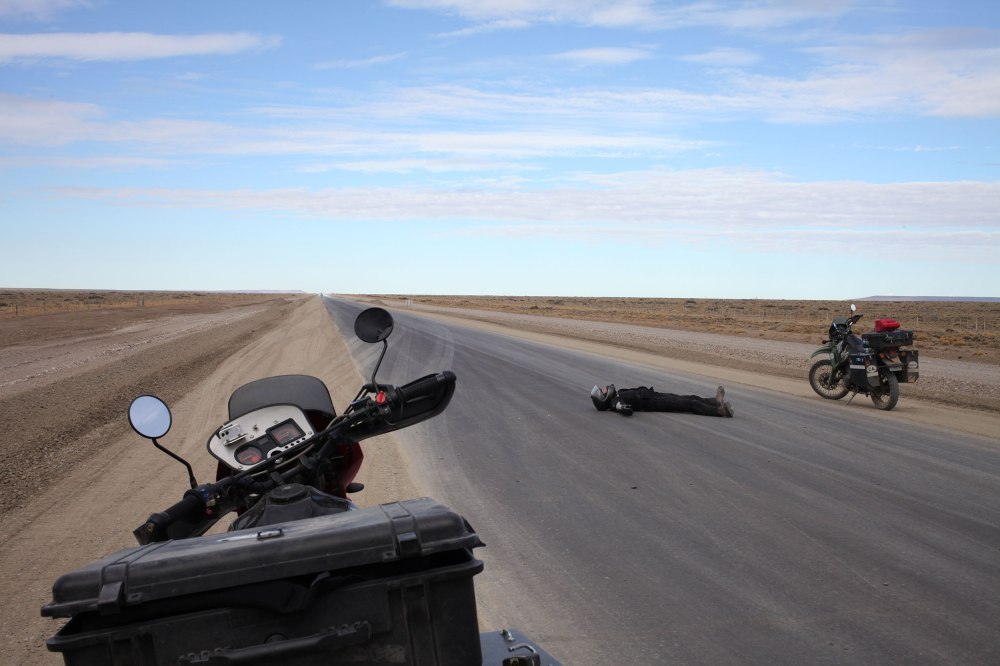 Nathaniel was very happy to get back to the asphault. Photo: Alex Washburn

The ripple for that ten miles was the worst of the trip, by far. Large stones that move when you hit them and then the monster truck tire marks of road that combine for slow painful driving. (I try to not exaggerate, and am sure some riders would call us wussies for complaining, but when you’re close to the end of a 15,500 mile ride you really don’t want anything to happen to your bike, and riding on these roads is hard on both rider and bike). We finally reached where the asphalt began, and enjoyed the freedom of being able to do 70mph again, all the way to Perito Moreno.

In Perito Moreno we filled up with gas and asked the attendants about the conditions of the road to Tres Lagos (our intended stop for the night, and original stopping point after Perito Moreno, trying to get back on track). He confirmed it was all paved for about 500km, which would get us to Tres Lagos at least. 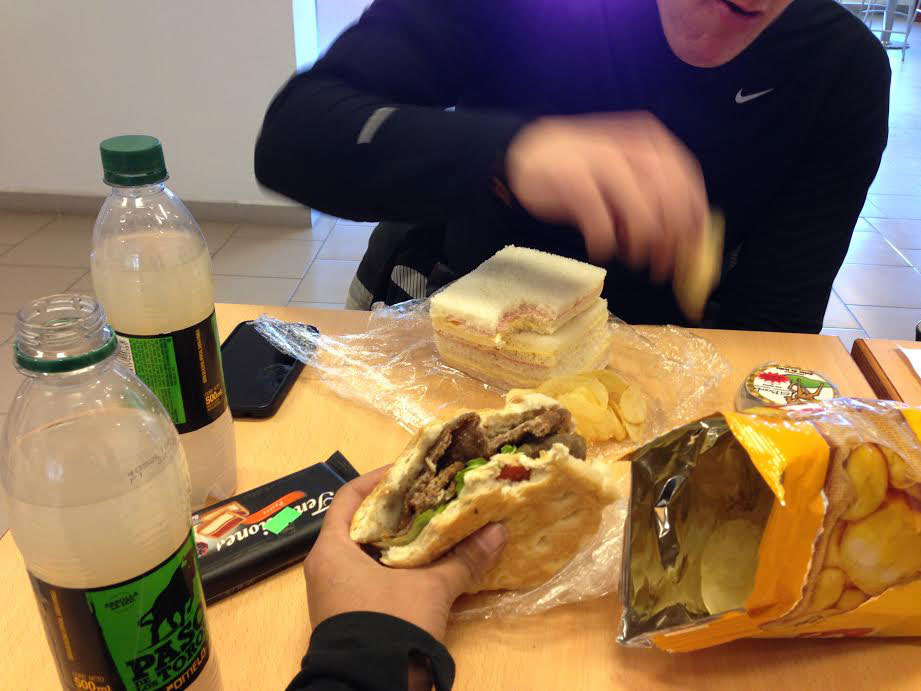 Riding from gas station to gas station, we made our way toward Tres Lagos, on amazing asphalt through dry plains. 100 miles, 200 miles, we pulled into Gobernador Gregones as the sun was setting, though with the goal in mind that we were going to make the push to Tres Lagos to stop from falling behind. I suggested to Alex that we should ask some locals about the road, just to make sure we didn’t get stuck on another ripple road, at night time.

After talking with a truck driver (they always know the best roads, and have really great concepts of distance) we learned that the road would be about 40 miles of asphalt and than would turn to ripple for another 80 miles till Tres Lagos. We were staying in Gobernador Gregones for the night, but good thing we asked.

It wouldn’t be till the next morning that we would find out that we somehow got off the 40, to get to Gobernador Gregones, but the 40 turned to ripple anyway, and wouldn’t have saved us anytime. It was off to another long day of gravel.

The truck driver was right on and after 40 miles, the road suddenly ended into a dirt road. It bears mentioning that the first 40 miles of this road was some of the best ripple road of the whole trip. Compacted dirt with little to no rocks that allowed us, at some points, to make it up to 40mph. At some point this ended, and was replaced with the larger rock ripple, that only allows 10mph and fatigues body and mind.

The detour to Gobernador Gregones ended up being a blessing in disguise as it not only prevented us from trying to get to Tres Lagos in one day, but also from having to stay in Tres Lagos, which didn’t have any real roads leading to it and in general looked less than welcoming (though I don’t actually know as we never made it into that town, but simply skirted it).

It took us four hours to go 80 miles and make it to Tres Lagos, however once we made it there we were hell bent on making it the rest of the way to Rio Gallegous, our original plan for those three days of riding. It would be another 200 plus miles of riding, ending the day at 360 miles, to get us into Rio Gallegos after the sun set.