I made a pillow out of my motorcycle gloves and a Marc Jacobs clutch (because I’m fabulous) to lay down as we waited for the JB Weld to harden during our first attempt to patch the radiator. Photo: Nathaniel Chaney

As my bike odometer ticked off the final tenths of a mile to 30,000 I started to slow my bike, shifting down through the gears I came to a slow stop and pulled out my phone to take photos of the odometer as Nathaniel parked his bike and jogged up to me.

I had missed taking a photo of the 20,000 mile reading in Guatemala (it had been raining) so the 30,000 mile mark felt extra special for both of us. Nathaniel started doing a happy dance, however my laughter was cut short as he pointed at the ground “Holy crap babe- your bike is leaking!”

At least I have photos of my bike hitting 30,000 miles! Photo: Alex Washburn

I looked down and an acid green liquid was all over my boots and engine, it had even puddled on the inside of my skid plate. I parked the bike and under closer inspection we realized the thin metal grating that protects my radiator which has been broken for sometime had rubbed a hole in the wall of my radiator!

I know that sounds bizarre, but since I ‘temporarily purchased’ the bike from Chuck Squatrigilia (who I also refer to as my motorcycle mentor) a year ago I’ve put somewhere around 20,000 miles on the bike. In 20,000 miles anything is possible.

It also kind of blows my mind I’ve put 20,000 miles on that bike in a year. My first year riding! Anyways…

Together we removed the screen and brought out the JB Weld. JB Weld is some amazing stuff, though it takes at least an hour to harden to the point where you can test whatever you are attempting to fix with it.

I tore off a piece and mashed it into a ball, rolling it around in my hands over and over till it was a uniform color I began trying to mush it over the hole that had been leaking the bright green fluid.

I say try because it would not stick although we had wiped the area dry. I tossed the useless already hardening putty into the bushes, tore off another piece and started the process again.

The second time it seemed to stick well so all we had to do was wait an hour before turning on the engine to see if the JB weld would do its job.

I took a few photos, Nathaniel took some photos, I skipped rocks across the road, we waited. I made a pillow out of my winter riding gloves and a Marc Jacobs clutch so I could lay down on the side of the road. I am sure any passing motorists thought I was crazy. 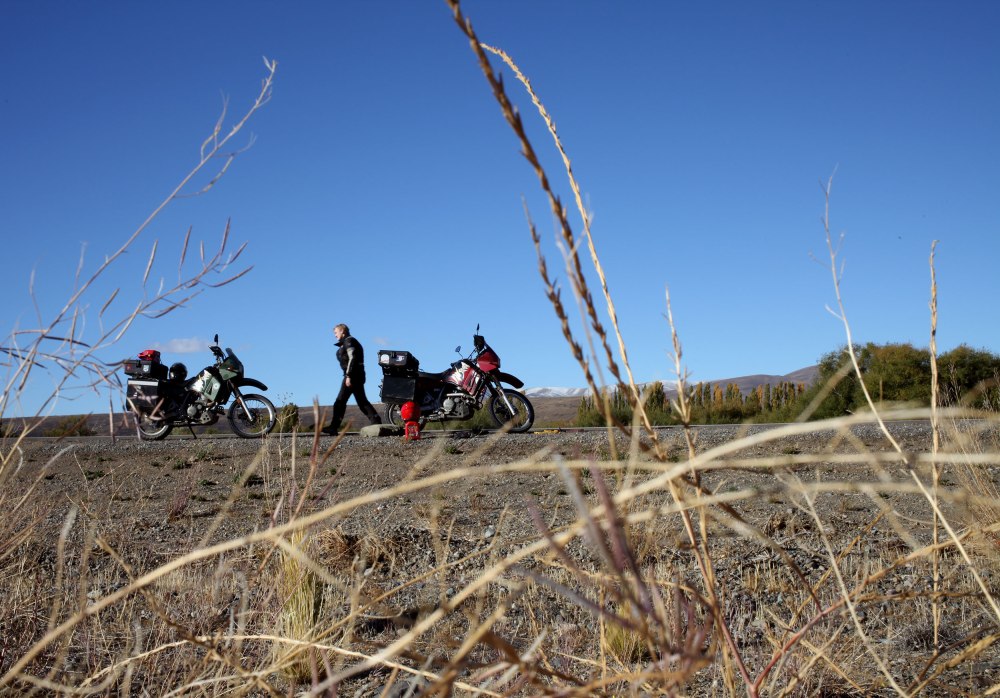 We were only 10 kilometers from the nearest town but it felt like we were in the middle of nowhere. Photo: Alex Washburn

After an hour we decided to try the bike and see if the JB Weld was going to hold my radiator fluid. Nathaniel started it up as I knelt on the ground to inspect the patch and it looked fine! We were so excited! 10 seconds, 20, 30, Nathaniel suggested we rev the engine to an rpm it would have to run at when we got back on the road and once he got it up to 3500RPM the green liquid start to ooze out of invisible cracks, which quickly turned into a steady drip puddling in my skid plate.

We shut the bike off and I reached for more JB Weld. We had enough daylight left to try this one more time before we were going to have to try something drastic like towing my bike behind Nathaniel’s without proper rope.

I began mashing up the grey putty as Nathaniel wiped the bike dry again so I could apply it. Carefully tapping and rubbing the JB weld onto its self I held my breath hoping it would stick and it did.

We had another hour to wait.

And, it didn’t work.

We were frustrated at this point mostly because it was going to be dark within an hour and still being up in the mountains it was getting cold. I waved a car down and asked if they had any rope. They didn’t have anything we could use to tow my bike, however they said the next town was only 16 kilometers away (ten miles), which was helpful to know.

I figured the only option was for Nathaniel to tow me with his bike so I connected my leather belt from Gap to the metal cable we use to lock up the bikes, which I in turn connected to a random length of orange stretchy cable (I don’t know where it even came from) using our padlocks. I thought it would hold, but Nathaniel had his doubts. The part I was most worried about was that it was only long enough to give us about two feet of space between his back tire and my front tire which I don’t need an expert to tell me is stupid and not at all safe.

We were both nervous because although we have ridden so far in the last few months we are still newbies when it comes to motorcycles. We still need help sometimes deciding if something can be fixed with duct tape or if we need a real mechanic. And of course, neither of us has ever towed a bike or been towed while riding one.

The way KLR plastics are shaped made it really hard to find something to wrap the cable around in the first place and our bikes have a much higher center of gravity than say a Harley-Davidson, which makes tipping over at low speeds really easy to do.

With my bike in neutral I was completely tense as Nathaniel carefully let his clutch out and got his bike rolling. The strange assortment of cables and leather held and I started to roll forward, but my front forks were jerked to the left and then the right and back again. I yelled at Nathaniel to stop, we took a breather and we tried again.

Alejandro is the only mechanic in Tecka Argentina, but from what we could tell he is a pretty handy one. Photo: Alex Washburn

I had no control over where my bike was going and Nathaniel said he was getting jerked around as well.

I think we got about 30 feet before we gave up.

It was at this point we decided that I just had to drive the bike to the next town. Neither of us wanted to leave the other waiting on the side of the road and Nathaniel doesn’t speak spanish so sending him ahead didn’t make much sense anyways.

It was cold enough out, and the JB Weld had slowed the leak down to a slow drip, where I thought my bike would be okay.

We were to the next town in a few minutes (exactly ten miles, which is surprising considering many times we have been told one estimate and had it be completely wrong),however it was much smaller than we thought. It was tiny. Like- so small if you were in a car and your passenger dropped something on the floorboard they might miss the town while they were bent over looking for it.

Just past the town’s only gas station Nathaniel pulled onto what looked like a paved driveway and braked very quickly. I braked hard to avoid hitting him and unfortunately for me the part I had to brake on was covered in gravel (of course).

My back end started to fishtail and I almost kept it upright. As my bike came to a stop it leaned so far I had to put my feet down, but it didn’t help. The bike was going over although there were a few seconds where I though I could hold it till Nathaniel got off his bike.

The bike was leaning at a 45 degree angle and both my feet were solidly on the ground, though I was straining to hold it in that position. Nathaniel saw what was happening and tried to get off his bike to help, however I realized (thinking back to a story about my Dad) that it wasn’t worth hurting myself to keep the bike from falling another two feet.

We spent pretty much an entire day at Alejandro’s shop and he taught us about mate! Photo: Alex Washburn

So, I let the bike go as I hopped to the right onto the ground with it to keep myself from getting pinned under it. Nathaniel helped me pick the bike back up and the KLR was of course fine, but I broke my THIRD mirror of the trip. (I assure you I teased him about this for the rest of the night.)

We were lucky that Tecka had a hotel because the next town wasn’t for 50 miles. The hotel ended up being a part of the gas station so after we locked the bikes up we bought some cold cuts, bread and chips to have a picnic in our room. It was sadly enough one of the more satisfying meals we had enjoyed for several days. 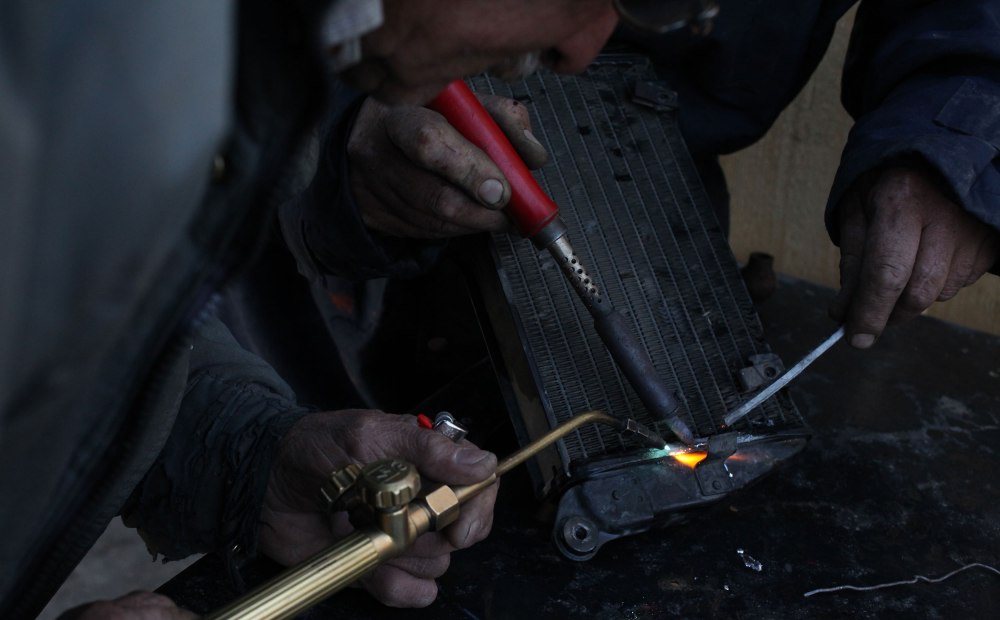 Alejandro and his friend go to work on my radiator. Photo: Alex Washburn

The next morning finding the town’s mechanic (Alejandro) was pretty simple seeing as it was the building with all the rusted cars laying in front of it. Alejandro appeared from across the street after we had only been waiting at the shop for a few minutes (it was early) and I tried to explain what was going on with my bike.

He told us to bring the bike over and he’d take a look at it.

Once he saw the problem he assured us he could fix it. Nathaniel went to get us coffee and pastries at the gas station while Alejandro and I went to work taking the bike apart. If I didn’t have the panniers and top box on the bike it would still be a little bit of a chore to remove the radiator, however all told you have to take off something like 19 bolts before you can even think about touching it.

Once we actually had the radiator out it didn’t actually take Alejandro that long to clean the aluminum with some acid and solder it back up. He also put some kind of hardening epoxy mixed with steel wool over the solder and explained that the epoxy can flex more with extreme temperature changes and will help the solder hold.

After we put everything back together it came time to pay and we did not have enough cash on hand. Nathaniel rode to the only ATM in town and it was empty! (of course)

I asked Alejandro where the next atm was and he said I could find one in the next town 50 miles away! So, off I road at about 70 miles an hour down the highway, checking to make sure the patch held about five miles down the road. Finding the ATM was easy and I powered down a milanesa sandwhich at that town’s only gas station before turning around and riding another 50 miles BACK to Tecka.

Nathaniel says that while I was gone Alejandro decided to make us dinner and went to the store to buy a chicken for us. This was how we found ourselves being fed dinner once again by a Argentinian mechanic.

After dinner we pushed on south once again, making it back to the town with the ATM and the gas station! 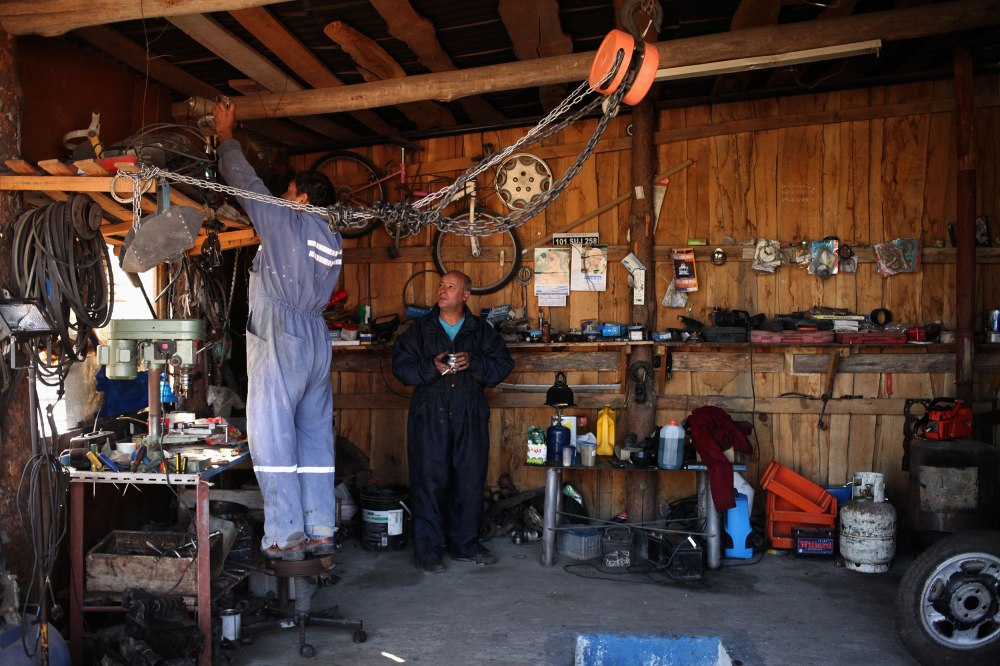