So far I’ve been completely blown away by the variety and quality of street food in Colombia. We haven’t seen so many options on the streets since Mexico and I think Colombia might even have Mexico beat. So far we’ve had arepas from several regions, churros, potato chips, chorizo, plantain chips, oblejas, chicharones and various fruit drinks. Here is a visual celebration of all of this with longish captions:

Plantain chips from the streets of Bogota for $1,200 pesos (63 cents in USD) Photo: Alex Washburn

This is an example of a San Gil Arepa. It comes stuffed with chicken, avocado, a quail egg and is drizzled with two different sauces. Photo: Alex Washburn

Here is a photo of my first Arepa. They are different from one another as you travel through Colombia, but they are usually delicious. This example is from Cartagena. Photo: Alex Washburn

Mexico has potato chips too and they are usually doused in hot sauce. I’ve fallen in love with the slightly thicker and much larger Colombian potato chips. They can be a little oil heavy from some vendors, but the texture is unbeatable. Photo: Alex Washburn

In Cartagena I hopped up and down when I saw people grilling ‘arepas con queso’ in the streets. Costa Rica and Panama are sadly lacking in street food and I was excited by both how amazing they looked and by the possibility that Colombia could represent a shift in street food culture. These patties are made of corn, however they almost have the texture of mashed potatoes because of all the cheese mixed into them. They usually have a thin piece of ham in them and the arepa vendor (in Cartagena) will slice it open and add a dash of butter to the melty madness before handing it over. They each cost $1. Photo: Alex Washburn

For the sake of this blog we purchased an ‘Obleja’ for less than a dollar and a half. For those of you with a sweet tooth I recommend picking up one of these as you wander through Bogota. An obleja is basically two wafers smooshed together and filled with deliciousness. We asked for ours ‘con todo’ and she layered on the cajeta, sweet cheese, jam and chocolate chips. I had my doubts because I’m not that into sweets, however a solid rule of travel: you should always trust the elderly Colombian woman. Photo: Alex Washburn 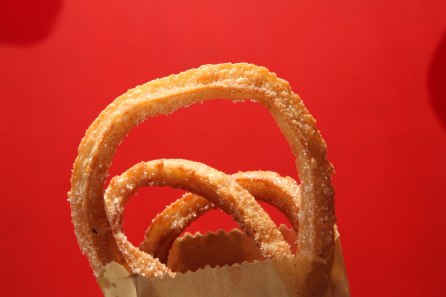 Churros in Colombia are much thinner than in many other Latin American countries. In Bogota they come in thin circles dusted with the obligatory cinnamon and sugar – they are of course delicious. Photo: Alex Washburn

I purchased this chorizo as it was being grilled on the streets of Bogota for less than $1.50 USD. It was a little spicy and salty and it paired perfectly with this unknown carb they hand out with a lot of their street meats. The only thing it needed was an Angila or a beer from Bogota Beer Company.