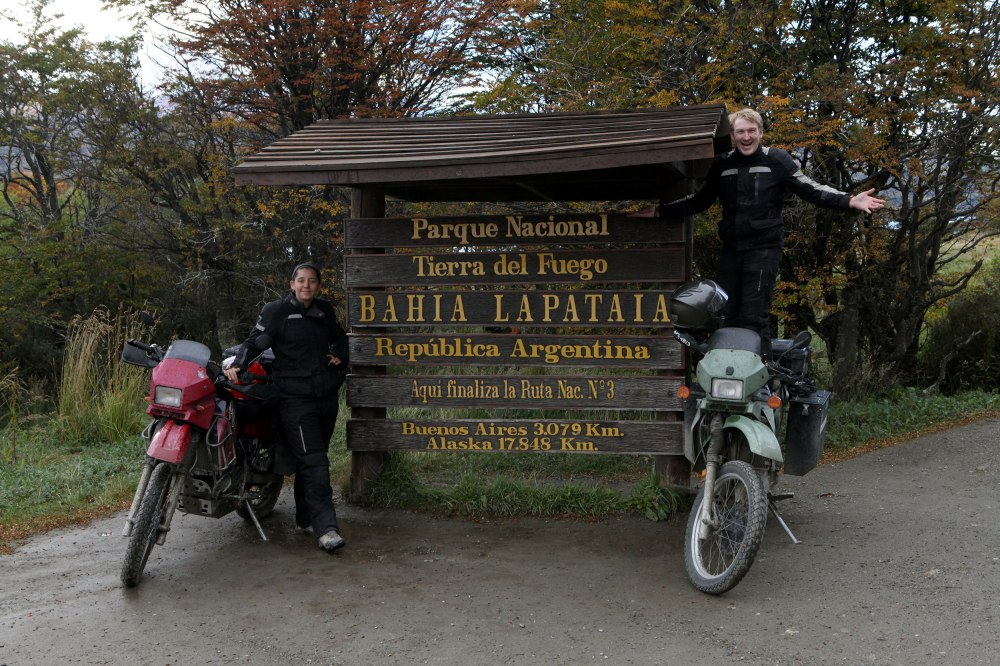 This is probably our favorite photo of the trip! Photo: Random European Tourist

As it had taken us the better part of a day to actually get to the gates of Ushuaia, the celebrating didn’t last long as the sun was setting in a darkening grey sky. One point of note that I noticed in our ride to the end of the world is that though the sky was dark, and rain threatened us more than a couple of times from Rio Grande to Ushuaia, there was a constant sun shinning toward the end of the road, the proverbial light at the end of the tunnel, that I thought was so befitting the circumstances.

As we high-fived on the side of the road, three motorcyclists pulled up next to us and Juan Pablo (Argentinian) introduced himself and his two fellow riders who were from Scotland. We explained that we were from California and that this was the last stop on our six month trek. Juan Pablo asked us if we had a place to stay, and seeing as we had not planned more than one day ahead, the answer was no. Originally we had thought to get a nicer hotel to celebrate the end of the trip, but Juan said his find owned the cheapest hostel in town and it had motorcycle parking. 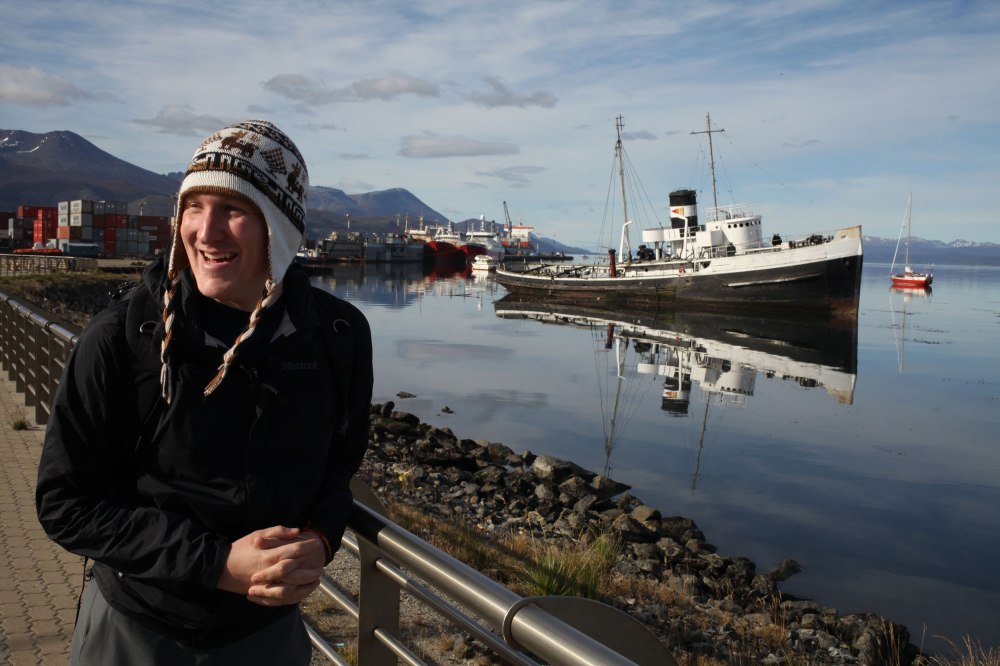 Nathaniel posing for a photo next to Beagle Bay. Photo: Alex Washburn

Tired from the drive, and seeing the sun sinking in the sky, we thought it would be a good idea to follow our new friends to this biker hostel and see what it was all about. Less than ten minutes later we were parked at Momo’s and being given a tour by Lisa (one of the two Scotish riders), who had been there for eight days already and knew the lay of the land.

Momo’s is an oasis at the end of the world, where things can, and do, get a little pricey because of the unique local and the amount of tourists. There is a big yard that can accommodate many bikes (this morning there were four BMWs and our two KLRs with room to spare) and the entire hostel has heated floors so being cold is never a problem. Being in the right place at the right time landed us here, and we are grateful that we continue to have good luck finding great places and friendly people as we ended up being in Ushuaia longer than we thought.

After throwing our bags into our room we headed out for a celebratory bite to eat and then promptly passed out once we got back to the room. The next day we explored the downtown of Ushuaia and booked a tour to see the penguins (one of the main attractions I wanted to do when we got here!).

Downtown Ushuaia is half Swiss mountain village and half industrial shipping port, mixing tourism and functionality into one small town. To the north it is bordered by mountains that house a glacier and were just starting to be frosted with snow in anticipation of the coming winter. To the south is Beagle Bay (named for Darwin’s famed H.M.S. Beagle) that plays host to the port and the cruise ships that pass through from time-to-time.

The tours to the penguin island aren’t until later in the day as that is when they are the most active and the light is the best for taking pictures, so Alex and I decided to head up to Glacier Martial, where there is a chairlift that I read will take you to the top. After being dropped off by a taxi in the parking lot of the entrance to the mountain we were to find out two crucial facts: one, the chairlift does not go all the way to the top, it actually only goes up about 500 meters, and two, it is now closed for the season as winter is coming.

Finding out this information too late, we enjoyed the views for a bit and then decided to walk back into town before we left for the tour (I ended up going back and hiking up the mountain a couple days later). The tour starts with a bus ride out to the only farm in Ushuaia, where you then take a boat out onto the bay. 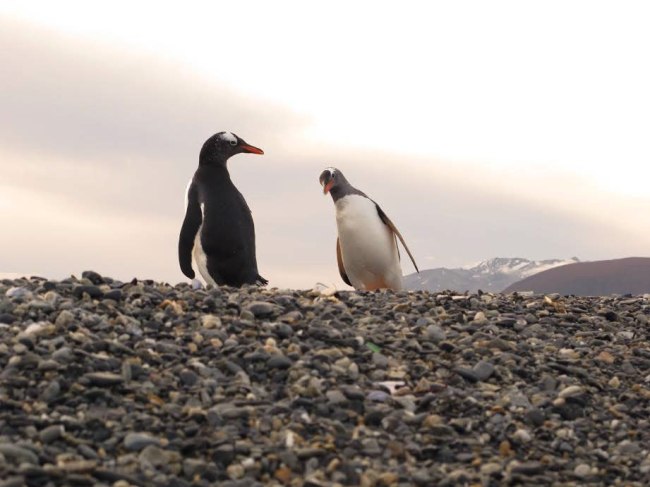 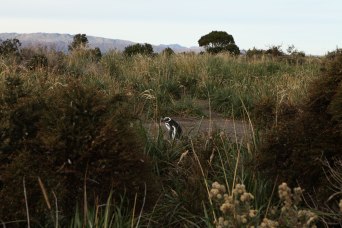 A magellanic penguin hangs out near its nest. Photo: Alex Washburn

A view of Ushuaia and Beagle Bay from Nathaniel’s hike. Photo: Nathaniel Chaney 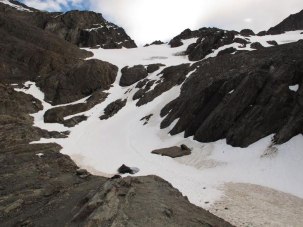 Trees that have been blown by the constant winds out on the plains of Ushuaia. Photo: Alex Washburn

Before we knew it, the moment I had been waiting for six months for was upon us and we were face-to-face with wild penguins! There were two types of penguins on the island when we were visiting, the purely black-and-white ones are Magellanic penguins, and they migrate from northern Argentina to Ushuaia every year to have babies, and then swim north again once the summer is over. An interesting fact we learned about this species of penguin is that other than breeding season, they live completely in the water, floating on their backs at night as they sleep and rest.

The other species of penguin, Gentoo, just recently moved to the area from Antarctica about ten years ago and now live on the island year-round (much warmer than Antarctica, I would say these are the smartest penguins in the world). Notice they have orange beaks and feet, and are what I would call a stereotypical penguin.

We got to hangout on the beach with them (3 meters back at all times) and they just waddle around, preening themselves and jumping in and out of the water looking for fish. It was amazing to see this little animal in its natural habitat, just doing what it wanted to do.

This was a completely spontaneous decision. Photo: Alex Washburn

After seeing the penguins there was only one other goal we had to accomplish in Ushuaia, and that was officially reaching the end of Ruta-3, which is the literal fin del mundo. Ruta-3 runs through Ushuaia and into Tierra Del Fuego National Park finally ending at Bahia Lapataia. There is a famous sign at the end that declares the official end to Ruta-3, and all bikers joke that you haven’t truly made it to the fin del mundo, until you take a picture of your bike in front of the sign.

Of course the morning we chose to ride into the park it started snowing and even doing twenty-miles an hour in the park our hands were frozen by the time we made it to the end of Ruta-3. Ignoring the group of tourists that had arrived in a bus, I pulled right past them and parked my bike next to the sign. After six months of riding, I wasn’t going to wait for any entire bus load of people to take their pictures, this was our time.

While we were snapping pictures and rejoicing at the official end of the autopista, another tourist strolling by told us we shouldn’t leave our bikes their as we might get a ticket. Not that we were planning on doing this, but it spurred in us a desire to take the no motorcycles sign that adorned the pillars in front of the Ruta-3 sign. We had been joking about taking a Ruta-40 sign, but they were too big, this was the perfect size and was held on by two flimsy looking screws. Out came the tool kit, and in less than a minute the sign was safely tucked away in our panniers, motorcycles once again free to bask in the glory of their accomplishment.

A fox approaches a car to beg for food. Photo: Alex Washburn

One of the other features of this national park are the foxes. When we entered the park the attendant we purchased our tickets from told us that “foxes will ask for food, but don’t give them any”. Low and behold, as we moved the motorcycles, the fatest fox I have ever seen came wondering out of the underbrush and started looking for food from all of the tourists that were gathered around. It acted more like a a dog than a fox, and it would go running up to any new vehicle that pulled into the parking lot.

It started snowing again as we packed the camera away, and we figured it was time to get back to the warmth of the hostel rather than freezing our tails off out on the road. It was a bittersweet moment riding out of the park, we were officially headed north, we had made it to where the autopista ends.

P.S. We will be posting a couple more blogs about how we got the bikes and ourselves home and reflections on the trip. We hope you will stick around for a little while longer and enjoy.