Travelers crave the authentic. They idealize it. And they brag about it when they achieve it.

Travel magazines, guide books and blogs do a great job motivating new tourists to pick up a passport and head to the airport every year which is AWESOME, however it also makes it harder for travelers (there is a difference) to make a real and unique connection to a place before it’s time to head back to the fluorescent life.

About a week ago Nathaniel and I managed to achieve one of those beautiful, authentic moments that made every time we’ve gotten stuck and had to pay too much for a hotel or broke down and bought American fast food (effing Tegucigalpa!) worth it.

It started in Lavalle Argentina, where the now familiar smell of gas was coming from Nathaniel’s gas tank and we suspected he had a new fracture in the tank, but couldn’t confirm till the morning as it was dark and we had rode 300+ miles that day.

Nathaniel and I had a lot of hanging around to do as Ariel and his helper worked on the gas tank. Photo: Alex Washburn

The next morning Nathaniel went through the process of taking off his panniers and top box and discovered one of the weld seams on his tank was slowly oozing gasoline. We would wipe the spot where it was collecting dry and then gas would immediately begin spreading from a crack so small we couldn’t actually see it.

We had fixed a different fracture in the tank with JB weld a few days before, though the position of the new fracture made it impossible to seal with the JB Weld.

While we waited for the JB Weld to set, Nathaniel googled “KLR Mechanic Mendoza” because the next large-ish town was only about 30 minutes down the highway. I still think that phrase was an incredibly specific thing to look for, but it gave us the name, address and phone number of a man that according to legend is half mechanic half wizard. Looking at the thread about “Ariel” on Horizons Unlimited was impressive, although it was seven years old – just for the heck of it we gave the phone number a call and someone answered!

I asked if it was Ariel the mechanic and he told me it was. I next inquired if we could bring a motorcycle for him to look at and he confirmed his address for me.

Less than an hour later we were sitting in the middle of a residential intersection in Mendoza Argentina confused about which house was the mechanic’s shop. A pregnant woman motioned to me and asked if we were looking for the bike mechanic- I replied we were and she pointed to a house (her house). The woman was Ariel’s wife and a lovely hostess for the next two days. 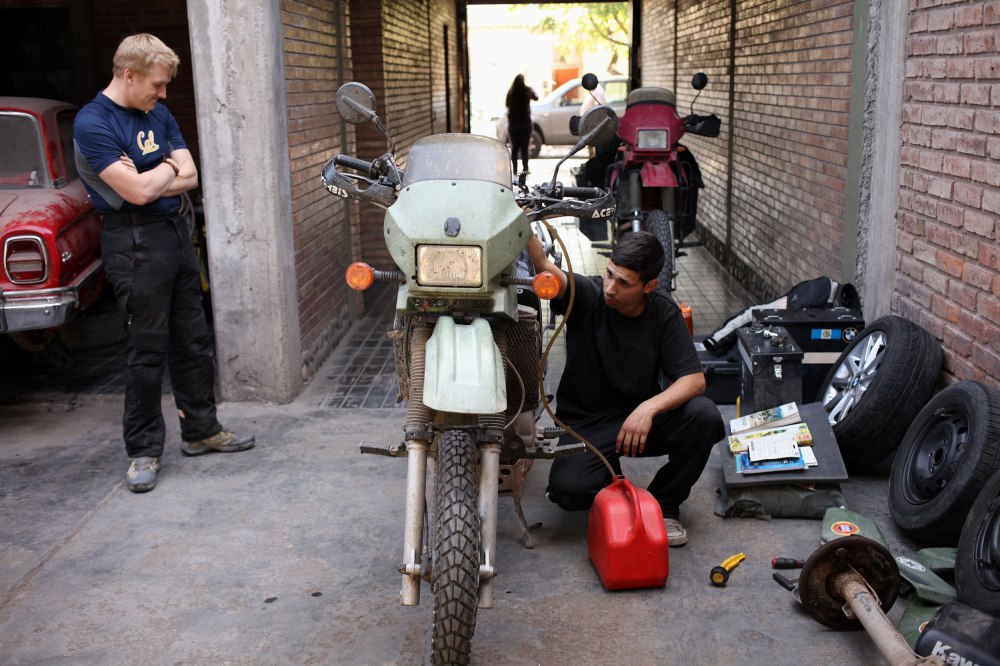 When preparing to weld a gas stank you need to remove all of the gas first… Photo: Alex Washburn

The back of Ariel’s house opens up into a huge work space with dozens of motorcycles, cars, quads and even a full size truck tucked in cozily next to each other (also a couple of 60’s Ford Falcons). The walls are covered with every tool imaginable and the obligatory sexy lady posters, although he of course seems to be a loving father and husband.

Before we were introduced to this space he met with us out in front and told use he could help us, but that we needed to come back a few hours later at 4pm. Argentina takes ‘siesta’ seriously and from 2 o’clock to 4:30 pm it is often impossible to get errands done. Even banks and ATMs close during this time.

When we came back at four we rolled our bikes into the back portion of his house and Ariel’s assistant went to work draining Nathaniel’s gas tank after they had a look at the cracks and temporary repairs. Ariel floated around monitoring his assistant, drinking mate and helping another young guy in the shop who was working on his own bike. The whole process was very laid back, so after an hour and a half the tank was prepped for surgery and Ariel went to work with the blow torch.

Ariel demonstrates why he is considered half magician by the ADV riders of Horizons Unlimited. Photo: Alex Washburn

After several blow torch sessions, we waited for what seemed like forever for the tank to cool down enough to be re-installed on Nathaniel’s bike and re-filled with gasoline. When we were ready to leave, Nathaniel asked Ariel how much he wanted for the work and Ariel told us not to worry about it and to come back the next day as he wanted to make sure the weld held and to ensure the quality of his work (it was now past dark). We were itching to get on the road, but agreed and then Ariel asked us if we would be able to return at noon and have asado with him and his family.

In situations like this I usually try to be polite and decline a few times before giving in. However, when an Argentinian gives you an invitation to eat asado at his house you say thank you and ask what time you should show up. 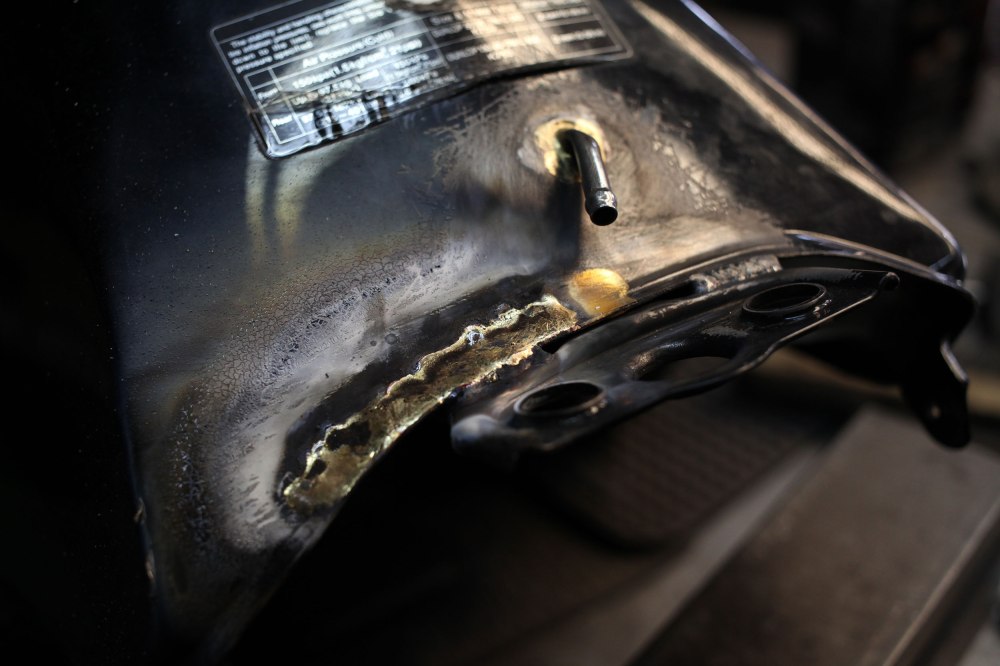 The tank rested on Ariel’s work bench for a while so it could cool off. Photo: Alex Washburn

We arrived a little after noon the next day and things were awkward at first. Nathaniel doesn’t speak Spanish and Ariel clearly wanted his 11-year-old daughter to practice her English with us. It was interesting to talk to her and see what her life was like. Ariel double checked the weld and approved that it was going to hold, but he later joked to Nathaniel that he wasn’t giving a lifetime guarantee.

Eventually we all moved to the top floor patio of Ariel’s house where they have a brick grilling area built right into the patio. The conversation got easier once we all began to relax and I carried my miniature dictionary with me the whole day. I can communicated pretty well in Spanish (obviously), however I knew that over the course of the next several hours words would come up in conversation that I wouldn’t understand and I didn’t care about looking like a nerd leafing through a dictionary.

By the end of the day I was mentally exhausted.

It’s impossible for me to explain the feeling of being wrapped up in that afternoon. The conversation was warm and easy while I tried to translate back and for between Nathaniel and our hosts as much as I could, though the conversation never really slowed.

A friend of Ariel’s manned the grill which was fueled by a wood fire and although the stomach meat was marinated the rest only saw a generous sprinkling of salt before he laid the pieces out on the hot grill with the care and skill of a surgeon. 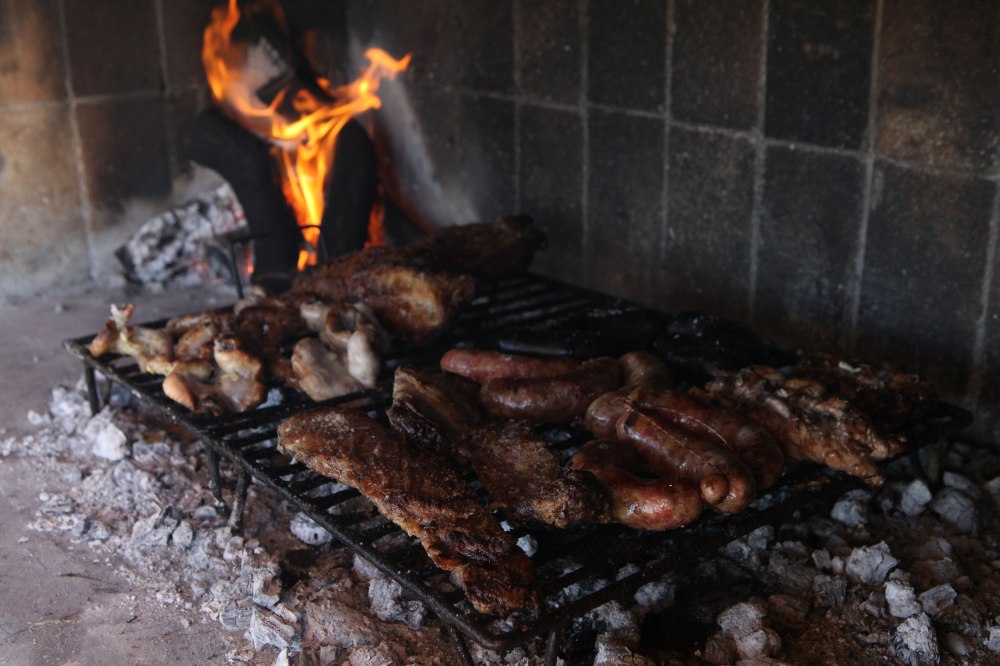 This grill looks simple, but it cooked the best beef I’ve eaten in my entire life. Photo: Alex Washburn

Argentinians don’t eat the meat once it has cooled off so there was one point where they took a cooled off piece from my plate and gave me a new one hot from the grill. I thought of it as strange, however there is no denying they are the masters of beef when you are crunching through the slightly crisped salty fat and biting into those simple delicious flavors.

I also really enjoyed their blood sausage, which was much softer than the blood sausages I’ve had in the past. It had the texture of pate on the inside and paired so well with the crusty fresh bread they had laid out on the table.

The entire time we sat on the patio I kept thinking to myself how lucky we were to be in that place at that moment.

As dusk came we started to say our goodbyes before disappearing off into the dark, back to our $20 a night hostel after having a dinner money cannot buy.

P.S. Ariel never did allow Nathaniel to pay for the services her provided, he said we had already paid with good company.

← Getting Caught Up
On the move →