As some of you may or may not know, part of the reason we were so rushed to get to Costa Rica is that Nathaniel’s Dad (Dave) flew down on December 18th to spend a little over a week with us touring around. As such, Alex went to the sloth sanctuary on December 17th, as it is on the other side of Costa Rica (three hours from San Jose in Limón). The complete insanity of that trip can not be captured in this post, further details to follow. Here, A baby two toed sloth wows visitors at the Sloth Sanctuary just south of Limon Costa Rica. She had a skin infection so they shaved her and put her in a onesie to keep warm. Photo: Alex Washburn 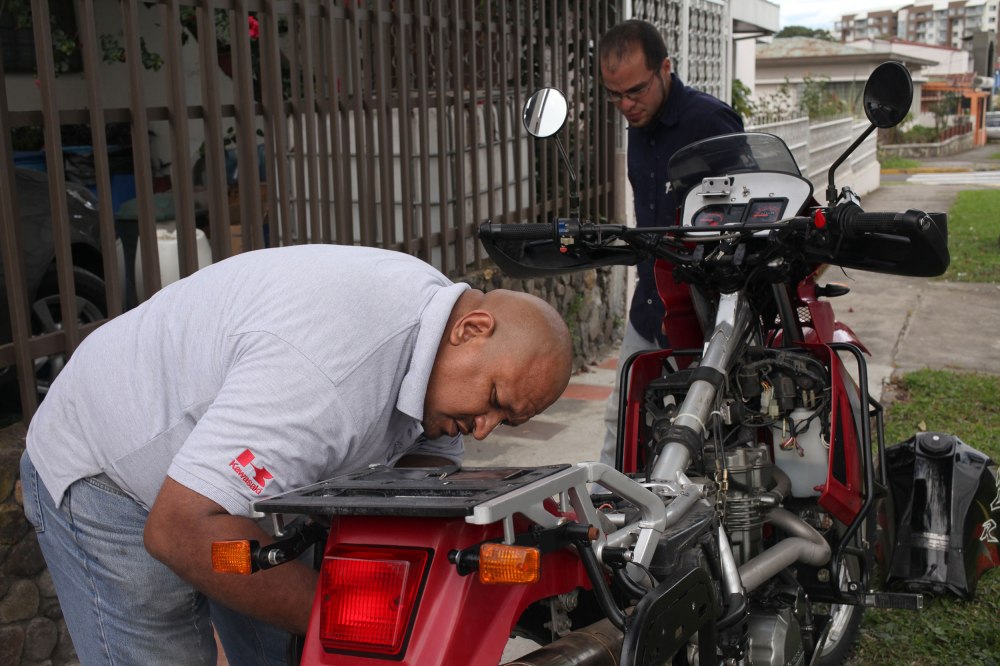 In San Jose we took the bikes into the Kawasaki dealership to have some basic maintenance done (chains cleaned, oil change, new clutch cable for Alex, replace Honda 50cc ignition coil on Nathaniel’s bike since Farmersville). It was on the way back from the dealership Alex’s bike blew the main fuse again. Replaced it and blew it instantly. Internet searches, e-mails/calls to gurus, and stripping the bike down yielded only knowing that there must be a short somewhere on the bike (Duh!). The mechanics from the dealership were dispatched over in the morning and finally found the short on the front turn signal. Bikes were nice and shinny for two whole hours before getting put back in the dirt. Photo: Alex Washburn

The first real day on the road with Dave we were traveling from San Jose to Monteverde to go to the cloud forest. Most of the trip was paved road, however, the turn off to Monteverde was 12 miles of loose gravel and rock on a vertical climb to get to the top. Windy, dusty, and beautiful, the views from Monteverde do not disappoint, as you can see all the way to the ocean. Photo: Alex Washburn 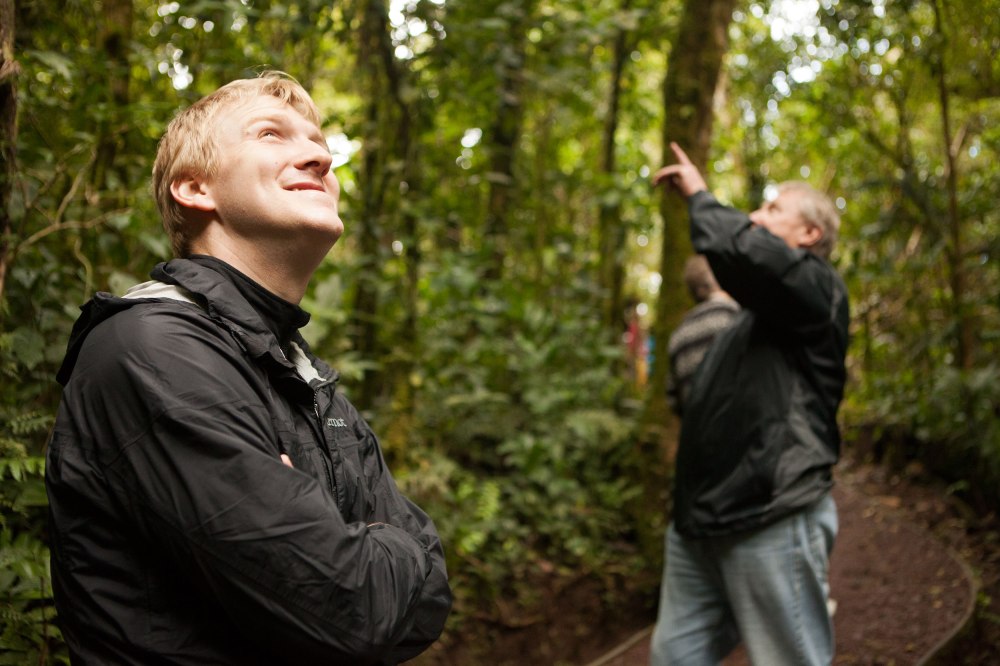 On the one full day we had in Monteverde we left early in the morning for a hike around the cloud forest (the place where clouds are literally born, from the warm weather on the pacific mixing with the cold air from the Caribbean). The biodiversity of Costa Rica is truly stunning as we saw sloths, quetzals, spiders, snakes, anteaters, coatimundi, and many varieties of hummingbirds. Our tour guide Bernal was one of the best we have had on this trip, animated and clearly loving being able to hike for a living. Photo: Alex Washburn 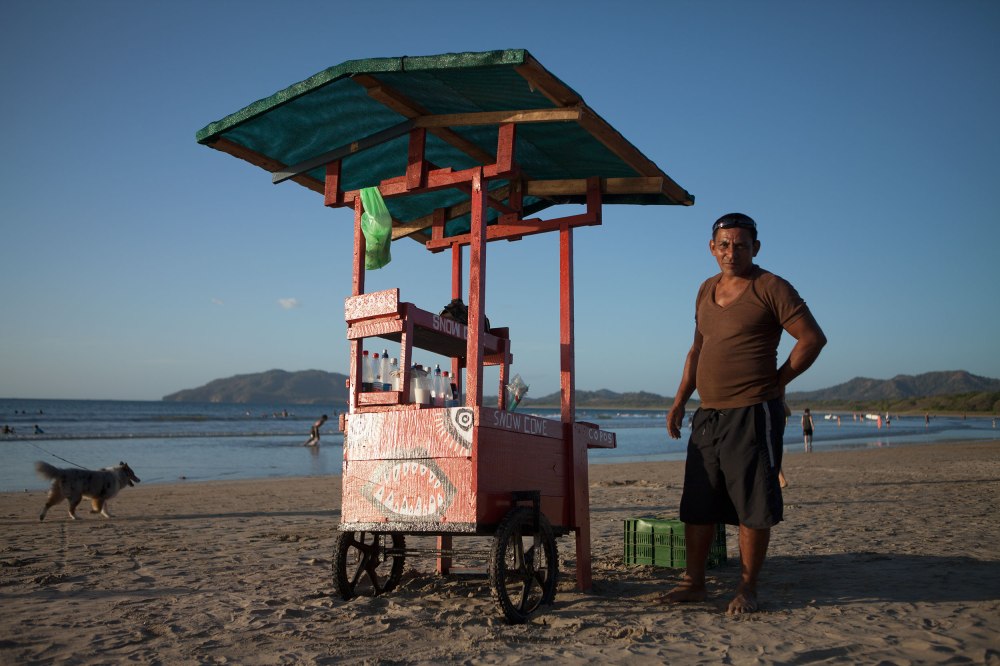 Tamarindo was the greatest little surf spot nobody had ever heard of…fifty-years ago. Now-a-days it is chuck full of boutiques, surf shops, and ex-pats all looking for a piece of the tourist dollar. As it is ‘high season’ in Costa Rica (from December to April), all the menus have been swapped and hotel rates lifted, making Costa Rica the most expensive country, by far, we have visited in Central America and often putting meals at or above American prices. The town itself is a small main street that hugs the coast and then splinters into dirt roads that go off into neighborhoods. The less adventurous traveler may enjoy Tamarindo for its faux third-world atmosphere and pervasive English, but veteran travelers can find less touristy spots with better surf elsewhere. The street food scene (usually budget friendly) is also pretty weak – this Snow Cone vendor was one of only three good finds Alex made in two days. Photo: Alex Washburn 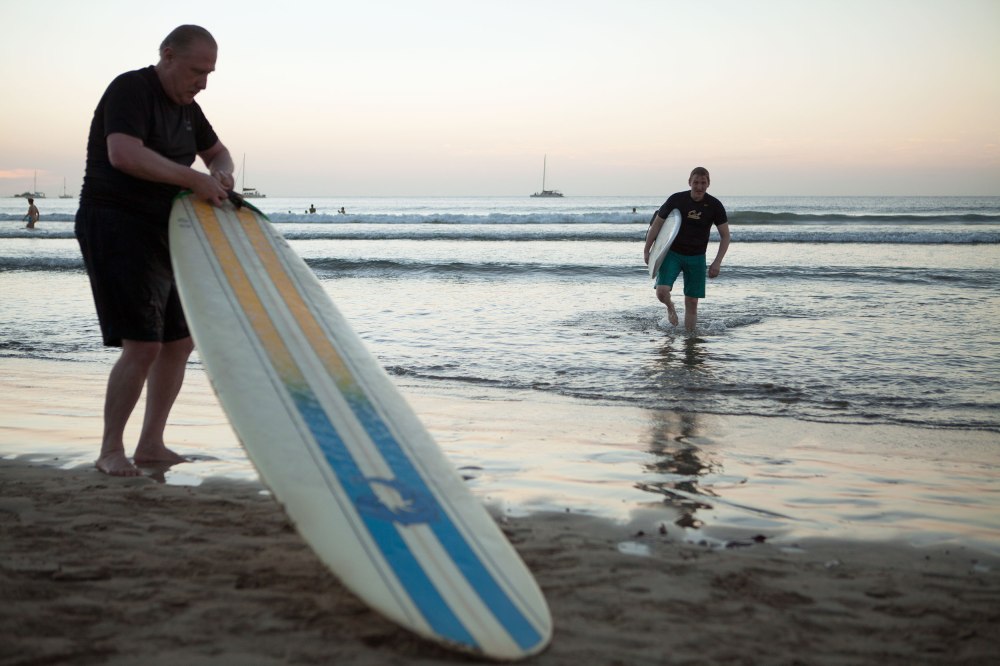 The waves in Tamarindo are great for beginners, and there are plenty of them that rove in packs known as Surf Schools, that take up all available ocean on the central beach. Most of these schools focus on the mechanics of catching waves and little to no effort on teaching people about how to maneuver the board in water. Subsequently you see lazy-ass Americans being pulled through the water while laying on their boards, lined up perfectly to catch a wave, and then being shoved off by the instructor and all they have to do is stand up (which most do not accomplish). Regardless – having lived in Santa Cruz for close to two decades Dave and Nathaniel were excited to get in the water. Photo: Alex Washburn

There could be a reason that the GPS told us to go around the peninsula and take a ferry to Montezuma instead of driving there from Tamarindo. On a path that is not serviceable in the rainy season, Dave in his Rav4 and we on the bikes, set out on our way to Montezuma (maybe this was a little revenge for us), along the only main highway that connects the peninsula with he mainland. Once we got to the junction of 18 and 21, we shut the GPS off and traveled on into the green wilderness. (Here Dave and Nathaniel are fixing Dave’s flat tire) Photo: Alex Washburn

As David would say four hours later “I wanted some adventure, but this may be too much.”

What awaited us on road 162 was the most challenging day of riding yet on this trip, some of which neither of us think we could have done two months ago. Fifty-miles of mountains on gravel/rock roads, seven river crossings (including one with 3 feet of water where the motorcycles had to cross), two broken down motorcyclists needing rides, a flat tire on the Rav4 (lucky we had a spare and were right next to a tire repair shop, out in the middle of nowhere), and eight hours later we arrived in Montezuma, a trip which everyone said should only take five. We earned our off-road badges yesterday and the victory dinner couldn’t have tasted better. This is a photo of us next to the final river crossing (the first was the biggest). Photo: David Chaney 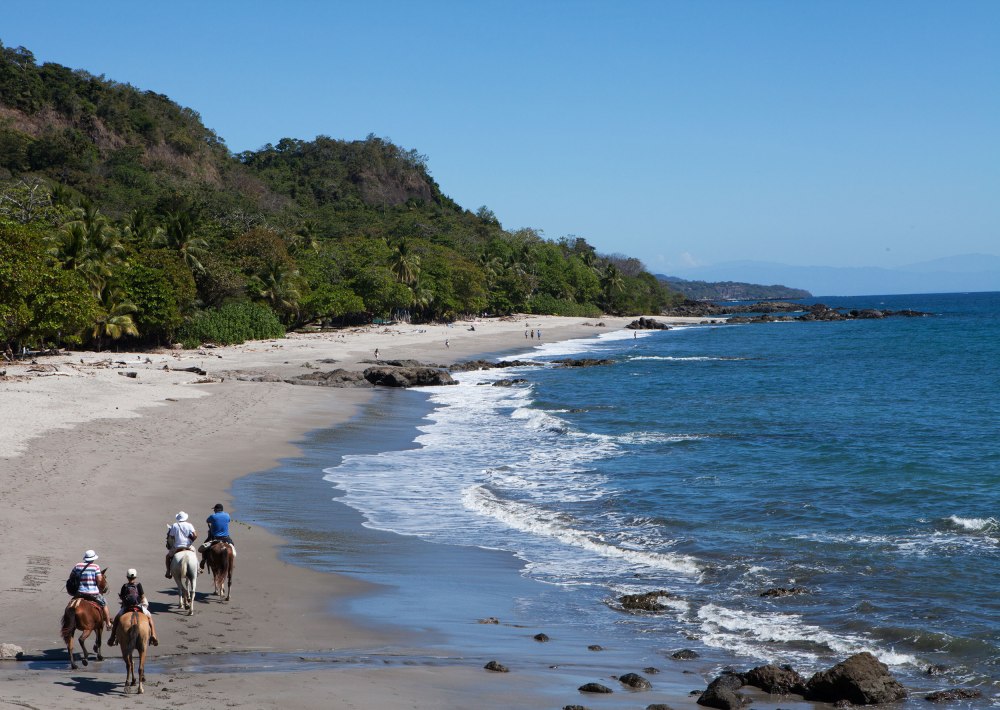 After our hours of hard riding we were rewarded with Montezuma.Montezuma is the beach town you wished Tamarindo was. Maybe because it is on the tip and only really accessible by ferry, or that there are several towns within driving distance that off equal fare, there is a lazy, laid-back vibe in this ocean town. Beach side accommodations can be found on the cheap, and the water is the bluest yet in Costa Rica, however best part yet might just be hanging out in a hammock on the balcony of the hostel and watching the waves roll in with a slight breeze on your face. Photo: Alex Washburn

Montezuma may not have the wildlife of Monteverde but it can still surprise you. Here, a White-faced monkey looks to steal any food it can from tourists. These little bastards are everywhere, and while tourists may ooo and aww over their cuteness, we are sure locals perceive them the way Americans do raccoon, a nuisance to be dealt with. Photo: Alex Washburn

← Life on the road
Costa Rica is Over →