It is impossible to get lost driving in the country of Belize. It’s tiny – at only 8,867 square miles in size it is barely larger than the state of Massachusetts.

In addition to this; a large percentage of this tiny country’s land is still untouched and they have minimal infrastructure. This has negatives and positives for the country as a whole, but what it meant for us as we looked at a map on Sunday is that there was only one obvious route to Placencia from Belize city and really only three major roads in the whole country.

A Canadian very familiar to the country had warned us about how terrible a fourth road (the coastal highway) was but we took the warning with a grain of salt because foreigners from first world countries sometimes have a skewed perception of what a ‘bad’ road is.

Sunday morning several Belizeans at our hotel confirmed that the coastal highway (which by the way is neither coastal nor an actual highway) was a terrible road. However – when we came to the turnoff where we could take the unpaved coastal highway or continue on the road most traveled we decided to have a little adventure (video coming soon).

We were on the coastal highway for less than 10 minutes and I could feel the smile slowly spreading across my face. It was rocky, dirty, muddy bumpy and everything our Kawasaki KLRs were meant to handle when we decided they were the best bikes for the trip. It took us 2.5 hours to drive 37 miles and it was fantastic (even if I tipped over twice and got super muddy). 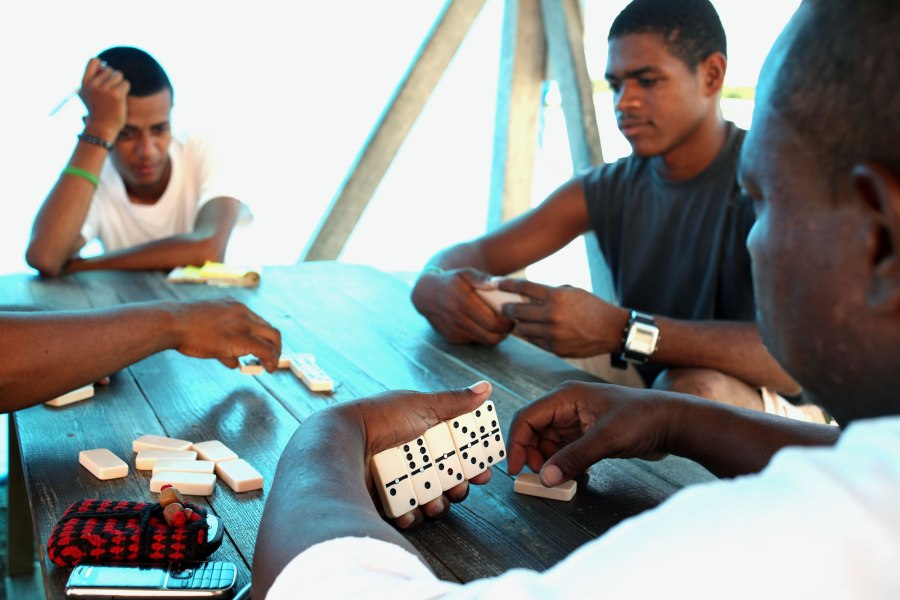 A group of locals concentrates on their game of dominos in the shade next to the only gas station in Placencia Belize. Photo: Alex Washburn

Placencia itself was pleasant enough… We decided to go because a local Belizean told us the miniature peninsula along Belize’s southern coast was beautiful and it is! However, most people seem to be in Placencia to lay on a beach and get a nice day drunk going which is just not the kind of tourists we are. Although, I got accidentally tipsy one day because the infamous “Ms. Brenda” served us two rum and punches but Nathaniel doesn’t drink. Ms. Brenda is not the kind of woman you send food back to so I had to drink both glasses while Nathaniel ate his spicy jerk chicken lunch without a beverage.

As we attempted to leave we ended up hanging out at a gas station for about twenty minutes with some of the locals. I was feeling really dehydrated and I didn’t want to start the three hour ride to San Ignacio before drinking some water so we filled up and chilled out. The taxi drivers and gas station attendants were more than happy to let us share their shade and laugh at their brisk games of dominos.

Belizeans have been super friendly towards us no matter where we’ve gone. There were a lot of homeless people and panhandlers in Belize City, but everyone we’ve met from gas station attendants to hotel clerks, fellow restaurant diners and random people on the street have been welcoming and talkative. The men at the gas station accepting our presence so quickly is just another example of this.

The ride to San Ignacio up the Hummingbird Highway was the most beautiful stretch of road we’ve come across in Belize. The hills are so overgrown with palm trees, flowers and vines they resemble the scenery in Jurassic Park. The asphault on the “highways” is generally in great condition and it isn’t until you drive through the cities that you encounter insane potholes. I have never experienced potholes like they have in Belize.

They are epic pits appearing from nowhere waiting to swallow your front tire whole. In many places swerving around one hole just dumps you right into another so it’s best to just ride straight through and try not to break your teeth as you grit through it.

When we arrived to San Ignacio we had our first meal of the day at Hode’s where this flute player provided the soundtrack. Photo: Alex Washburn 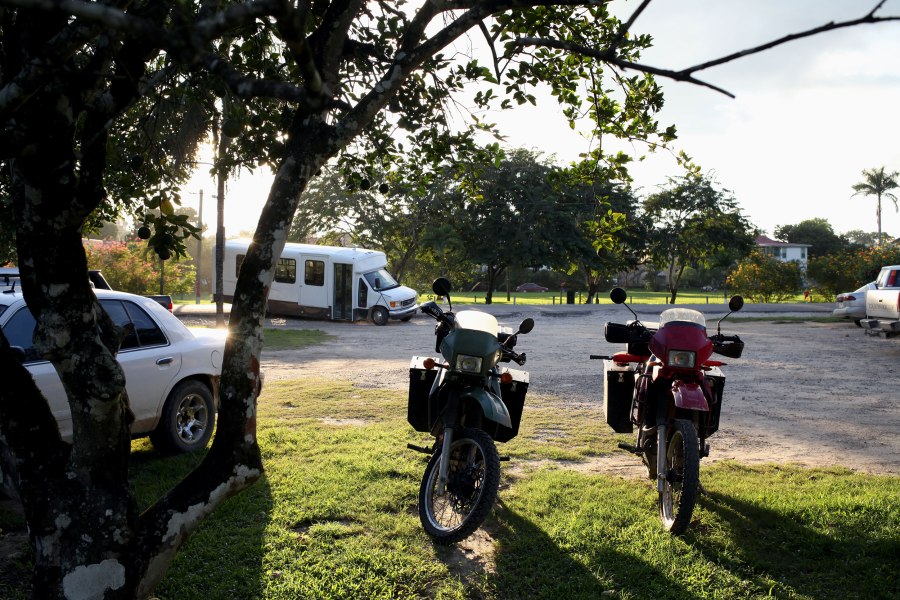 Our bikes parked in front of Hode’s restaurant in San Ignacio Belize. And yes – that is a giant red umbrella attached to my bike. Photo: Alex Washburn

We arrived to San Ignacio in the early afternoon and after battling some epic potholes and unpaved surfaces in the city itself, found a place to eat and a hostel with a secure yard for our bikes. We didn’t have to actually come to San Ignacio, but we wanted to be close to Belmopan (the capitol) because we made an appointment to have our bikes looked at today.

We are both eager to (hopefully) cross the border into Guatemala after our appointment and continue our adventures in Spanish speaking Latin America.

RECOMMENDATION: If you are riding bikes from the US through Latin America it might be hard to get your bike serviced in Mexico depending on what you are riding. If you come to Belize – Motor Solutions in Belmopan is a well stocked shop that should be able to help you out and English is the official language of Belize which should be a relief if you don’t speak spanish.

← Swimming with Sharks
The Coastal Highway →