Eva and Rick are the lovely people who own Baja Backpackers in La Paz Mexico. Because of the problems with our paperwork we ended up staying at their hostel for over a week and Alex created a new web site for their business. Photo: Alex Washburn

After a week of being in a holding pattern in La Paz, Alex received her documents in the mail via DHL (thank you Val!) and by Wednesday we had everything we needed to board the ferry on Thursday.  We got up early, did a little maintenance on Alex’s bike (which involved taking the gas tank completely off), packed all of the gear (which took longer due to a week of rust) and headed off to Pichilingue to get our importation documents for the motorcycles and board the ferry.

Several hours later, we boarded the ferry without any problems (it’s amazing how fast bureaucracy works when you have all the right paperwork!). Waiting to board the ferry, a fellow motorcyclist pulled up and helped us while away the time with good conversation.  Jim was riding a BMW down from Seattle to his second home in Mazatlan.  He had great stories of family, and his own adventures riding through Mexico, Belize, and Guatemala.

Checking in with security before leaving the port area in Mazatlan. Photo: Nathaniel Chaney 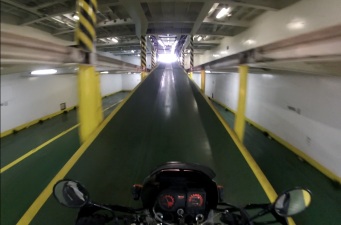 Heading up the ramp into the sunshine after a 16 hour ferry ride. Photo: Nathaniel Chaney

After securing the bikes on the ferry (which consisted of tying them down with rope) we headed to our seats, which were pretty comfortable and proceeded to watch some movies and sleep for the next 16 hours. Untied the bikes, and disembarked in Mazatlan without any instances, though while on board Alex had determined that we were going to have to ride 700 miles in two days to reach her family in Huamantla.

The first day we left Mazatlan at 11am and rode all day aside from a gas stop, and two tip overs, one by me and the other by Alex, into a car (count is 4-2 with two dinged cars), until dusk to reach Guadalajara setting a new one day record of 300 miles. The country between Mazatlan and Guadalajara is some of the best I have seen, and one name I thought of for this post was going to be ‘The Road of Butterflies’ as there were sections of road with hundreds of butterflies on either side (and sometimes in the middle). 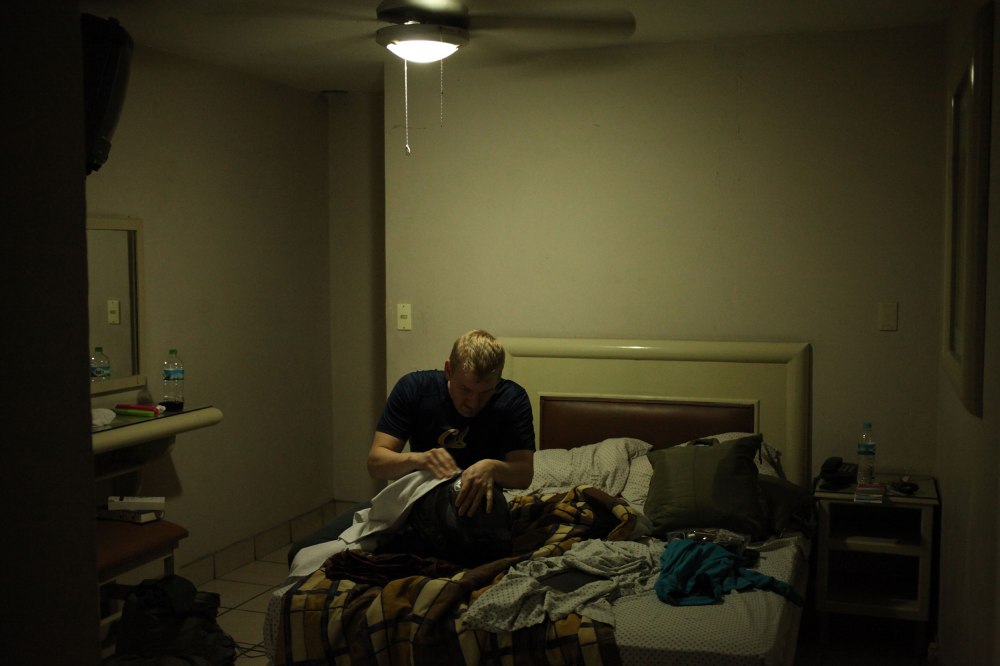 We pulled into a nice looking hotel in Guadalajara and intended to check into it until Alex saw a more “cost efficient” business across the street. The room was about $24 USD but it had hot water and was clean. Photo: Alex Washburn

Less than 12-hours later it was back on the bikes as ‘Alex the whip’ drove us on to Huamantla. From Guadalajara to Huamantla was going to be over 400 miles, my reaction the night before was:

We left just after sunrise and made it to Santiago de Querétaro by 2:30pm with only one stop for gas and food in between. That is when the things got really tough.

What some that haven’t rode a motorcycle or haven’t gone long distances don’t understand is that there is a slow deterioration of the feeling in one’s gluteus maximus as the day goes on. In the morning you’re fine, smelling fresh flowers and grass, listening to the roar of the engine and the wind past your helmet, meditating in your own world as the country passes you by. But as the day goes on you begin to loose feeling in your posterior, the smell of flowers is replaced by truck fumes, and the wind becomes a relentless howling echoed only by the constant drone of the hell-beast that is your horse trampling down any resemblance of a thought in your head.

At 4:00pm we stopped for gas (again), with rain clouds on the horizon of Mexico City D.F. my spirits were low, reflected in the idling of my engine, that had lowered as well, due to the altitude we had climbed that day. Alex insisted we could make it, and I had to channel a new inner level of zen to sally forth past the thoughts of doubt that continued to haunt me during the ride.

Our route from Mazatlan to Huamantla

A few minutes later, we were back on the road, that fortuitously turned to the east, bypassing most of the clouds (and rain) and took us on a route to Huamantla skirting Mexico City (which everyone under the sun told us to avoid driving in as it is the largest metropolitan area in the western hemisphere).

A couple of drops of rain, some heavy wind, and another 100 miles brought us to the doorstep of Alex’s house in Mexico, in a little town named Huamantla that sits in the shadow of a mountain called ‘La Malinche’. A new record setting day of 432 miles came to an end with empty stomachs (and gas tanks) and sore bottoms. It was all made worth it when we were welcomed by family, given a hot meal, and a warm bed to collapse into.

You always reach your destination, even if it wasn’t where you planned.